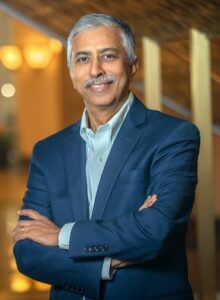 Nearly 96.2% of the compensation paid to CEO Githesh Ramamurthy came from stock awards, according to Crain’s.

Crain’s reported that Ramamurthy, a 30-year veteran of the company who also serves as chairman, received a “whopping” 9,020.4% pay raise in 2021 after CCC became a publicly traded company. That would put his 2020 pay at roughly $1.5 million.

The transaction netted CCC $968 million because none of the existing investors cashed out in the deal.

Crain’s notes that the “massive incomes” of Ramamurthy and two other CEOs on its list, Scholl and Osanloo, “may be fleeting” because they’re all a result of public offerings. Last year’s highest-paid CEO, Michael Pykosz, took home $73.5 million in 2020 after taking Oak Street Health public with about 98.7% of his total pay coming from stock and option awards. In 2021, his total income fell to $886,490.

Ramamurthy joined CCC in 1992 and has held several key management positions, including executive vice president of product engineering and chief technology officer. He was named president and COO in 1997 and elected chairman in 2000.

“The reported compensation is part of a total compensation package factoring in expectations of CCC’s continued strong growth with ~80% of compensation tied to future performance, which may be earned over several years, and driven by CCC continuously delivering value to customers,” Michelle Hellyar, director of public relations for CCC, told Repairer Driven News.

Executive compensation by auto insurers came under scrutiny by the Consumer Federation of America (CFA) in April. The nonprofit said its review found that the nation’s largest carriers were paying their top executives “massive salaries and bonuses,” even as they continue to seek higher premium payments from consumers.

CFA’s figures were based on its review of filings with the Securities and Exchange Commission and the Nebraska Department of Insurance.

According to Crain’s, Allstate CEO Tom Wilson earlier this month sold nearly 242,000 shares in the company, netting more than $21 million.

According to filings with the Securities & Exchange Commission (SEC), the shares were converted options granted in 2013 and set to expire in February 2023.

Crain’s said the latest stock sale is Wilson’s second in the tens of millions in the past two years. In May 2020, he netted nearly $46 million after converting options granted in 2012, the publication said.

The new sales come as Allstate’s stock price has “stagnated amid profitability pressures stemming from rapidly rising auto insurance claims costs,” Crain’s said. Allstate’s stock has dropped nearly 3% so far this year. By comparison, the stock price of its rival Progressive has gone up nearly 20%.

Wilson, who was paid a total of $36.4 million in 2020 and 2021, told shareholders in February that the carrier would be pursuing an aggressive course on rate increases, and said he expected no difficulty with approvals.

“Wilson has stressed in recent months that he believes Allstate’s stock is undervalued, which could raise investor eyebrows with his latest stock sales,” Crain’s said.

This story has been updated.