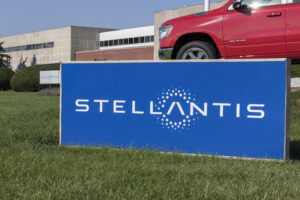 The agreement comes at a time when other OEMs are predicting a shortage of battery supplies for EVs and are preparing for the worst by planning ahead in hopes of preventing raw material shortages that would affect the production of lithium-ion batteries – the main power source of EVs.

Saying the agreement “sets a new sustainability benchmark for U.S. battery supply chain,” Stellantis plans to use lithium hydroxide to support its “U.S. product offensive” of more than 25 all-new battery electric vehicles (BEVs) and to reach its goal of 50% BEV sales by 2030.

“In the fight against global warming, bolstering our battery electric vehicle supply chain to support our bold electrification ambitions is absolutely critical,” said Stellantis CEO Carlos Tavares, in the release. “Ensuring we have a robust, competitive, and low-carbon lithium supply from various partners around the world will enable us to meet our aggressive electric vehicle production plans in a responsible manner.”

CTR CEO Rod Colwell added that the offtake agreement reached earlier this month between the two companies “sets a new benchmark for the automotive industry in the United States.”

“Securing clean lithium produced with energy from a renewable resource helps to further decarbonize the battery supply chain which in turn, delivers cleaner cars with less environmental impact,” he said. “We look forward to a strong and successful relationship with Stellantis.”

CTR will supply Stellantis with up to 25,000 metric tons per year of lithium hydroxide over the 10-year term of the agreement. Stellantis announced in late 2021 a similar supply deal to support its European vehicle production.

As part of its Dare Forward 2030 strategic plan, Stellantis plans to reach global annual battery EV sales of 5 million vehicles by 2030, including a 50% passenger car and light-duty truck BEV sales mix in North America and 100% of passenger car BEV sales in Europe.

Stellantis also plans to increase battery capacity by 140 GWh to about 400 GWh, which will be supported by five battery manufacturing plants and additional supply contracts in North America and Europe. CTR will produce battery-grade lithium hydroxide and lithium carbonate along with geothermal energy in Imperial County, California with a resource production capacity in excess of 300,000 metric tons per year.

Volkswagen recently opened a $22 million, 32,000-square-foot Battery Engineering Lab (BEL) in Chattanooga, Tennessee, where EV batteries will be tested and optimized for the U.S. market – a move that the OEM believes will give it the upper hand over its rivals in the growing EV field.