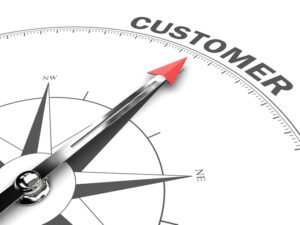 Customer satisfaction with the claims process is directly related to how familiar consumers are with their auto insurance policies, and only half fully understand what is covered and what is not, according to results from the J.D. Power 2022 U.S. Auto Insurance Study.

“What we find to be the biggest correlation is that the customers that have poor claims experiences typically didn’t understand their policy to begin with,” Robert Lajdziak, director of insurance intelligence at J.D. Power, told Repairer Driven News.

Claims are one of five factors examined in the study, which found that consumer satisfaction with auto insurance, in general, has flatlined in comparison with last year. The study, now in its 23rd year, also examined billing process and policy information, interaction, policy offerings, and price. The study is based on responses from 36,935 auto insurance customers and was fielded from January through April 2022.

This study, which focuses on the overall service relationship between the insurance customer and the carrier, does not dive as deeply into the claims experience as another J.D. Power study that looks specifically at that topic.

One interesting data point, Lajdziak said, is that customers who have filed claims report higher satisfaction than those who have not. While part of the result can be attributed to “baked-in” bias, with unsatisfied customers tending to move on to a different company, it also bears on policy understanding, he said. 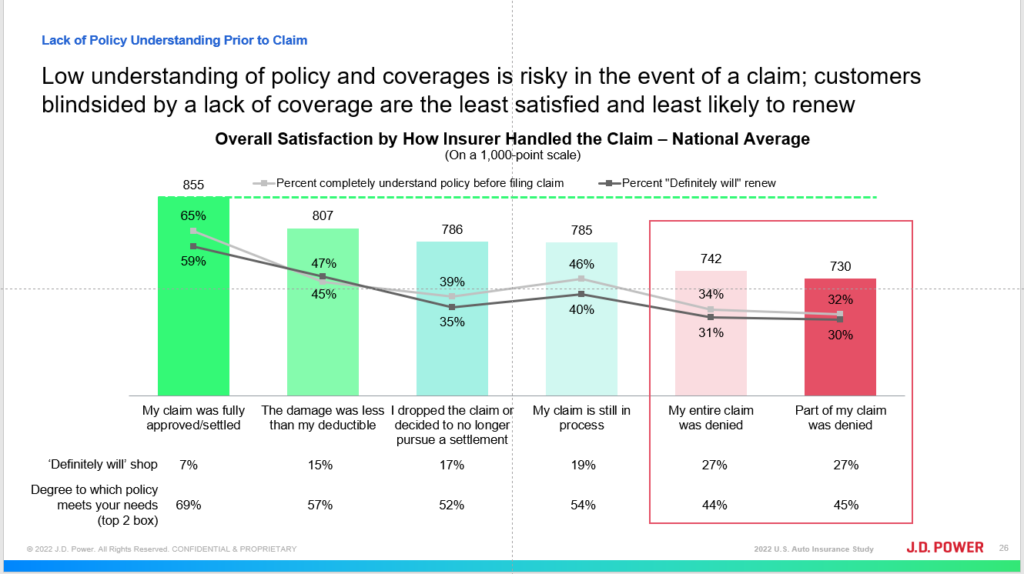 The chart above shows satisfaction with claims, rated on J.D. Power’s 1,000-point scale and broken down by consumer experience. What stands out in the chart, Lajdziak said, is that the group whose entire claim was denied reported greater satisfaction (742) than those who had a part of their claim denied (730).

“Why is that? Well, what we find when we look underneath the hood of that data, is that … the policy understanding is not good, in either of those buckets. The ones where part of the claim was denied felt like something else should be covered, and it wasn’t. Those where the entire claim was denied [reported] being more satisfied, usually there’s something in the policy that can be easily pointed to that shows that this is not included.

“Interestingly enough, what we see in this study specifically is usually that’s related to rental car coverage. People feel like it’s included in their claim, but they didn’t pay for it when they bought the policy,” he said.

Lajdziak said that many customers don’t take the time to read their policies to learn about what type of coverage they’re paying for. “What’s really scary is that this is an area where the industry has not improved” since J.D. Power began conducting the study, he said.

“Just slightly over 50% of consumers feel like they completely understand their policy. That’s a figure that bounces around 1, 2% up or down every year, but it is not seeing any sort of trajectory of improvement.”

One factor is the “dramatic” increase in digital engagement, he said.

“The two most common ways that brands are successful at getting customers to better understand their policy are having a conversation with them – something like an annual policy review – or digital engagement. And we know from a litany of surveys that we do, digital engagement is increasing dramatically.

“Where there’s the gap is, people just aren’t having those live conversations, because [digital access] is a low-touch product that people just kind of set and forget until they actually need to file a claim.”

Beyond the specific claims results, overall, customers who take such a “multi-channel” approach report being the most satisfied, Lajdziak said. In fact, there’s an overlap: Those who are using an insurer’s website report being more happy with their agent or contact center representative.

“The reason is because they’re able to do everything more efficiently. They can do the transactional things online and spend quality time with that live person, and everybody is more efficient for it,” he said. “I think that’s that’s one of the key stories coming out of this data.”

Partly offsetting that drop, however, was a two-point increase in satisfaction with the billing and payment function, attributable to digital improvements. “If I were to borrow a line from the airline industry, I’d say they’re providing a better soft product. The hard product, you know, the actual policy itself, is really no different, except for those customers that might have switched to a usage-based or telematics insurance product,” Lajdziak said.

The study also found that insurers that notify their customers about premium increases in advance are able to mitigate the negative effects they generate. In the past year, 59% of customers experiencing a price increase were notified in advance by their insurer — up from 44% in 2016 — and overall satisfaction scores are 37 points higher, on average, among those pre-notified customers, J.D. Power said. It found that smartphones are the most effective channel for this type of notification.

By region, the carriers with the highest consumer satisfaction were: