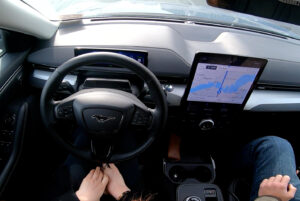 A new survey released last week by the Insurance Institute for Highway Safety (IIHS) concludes that drivers are interested in partial driving automation, but are less comfortable with hands-free features in a vehicle that is not fully self-driving.

“It may come as a surprise to some people, but it appears that partially automated features that require the driver’s hands to be on the wheel are actually closer to one-size-fits-all than hands-free designs,” Alexandra Mueller, the survey’s primary designer, said in a press release.

This study also confirms the public’s possible intention to misuse advanced driver assistance system (ADAS) features such as lane keeping and adaptive cruise control, making it “imperative that the technology be designed in ways that deter such misuse,” the authors conclude.

“The data suggest that consumer information, including marketing, has a role to play to communicate the purpose and safety value of driver monitoring and other user-centric design safeguards to promote their implementation, acceptance, and safe adoption,” reads the study, written by Mueller, Jessica B. Cicchino, and Joseph V. Calvanelli Jr.

The study notes that while there are no fully autonomous, or SAE Level 3, vehicles on the market, “[s]ome driving support is so sophisticated that it can give consumers the impression that the vehicle can drive itself. At present, however, there are no driverless or self-driving vehicles on the consumer market.”

“Automakers often assume that drivers want as much technology as they can get in their vehicles,” Mueller said. “But few studies have examined actual consumer opinions about partial driving automation.”

Working together, lane centering and adaptive cruise control can provide partial automation, although the driver is still in control of the vehicle, and must be ready to take over at all times. Some vehicles are equipped with automatic lane change, an ADAS feature that lets the vehicle pull out to pass and return to its lane without the driver having to do anything.

The survey found that 80% of respondents want to use lane centering, but more prefer versions that require their hands to be on the wheel (36%) than those that do not (27%). This was the highest acceptance level for any of the technologies in the survey.

While 73% said they would use automatic lane changes, 45% said they preferred the feature to be driver-initiated, against 14% who wanted it to be initiated by the vehicle. More than three-quarters of respondents said they want auto lane change to have a hands-on requirement.

Respondents also expressed a high level of acceptance of three types of driver monitoring, which IIHS and other safety and industry experts consider a necessity for semi-autonomous driving. Driver monitoring is a component of the ratings IIHS is developing for partial automation systems.

A majority of drivers said they would be comfortable with all of the driver-monitoring strategies included in the survey: sensors on the steering wheel, or a driver-facing camera that tracks where they are looking, or a camera that tracks head, eye, or hand movement. That was true whether or not the feature allowed for hands-free operation.

“The drivers who were the most comfortable with all types of driver monitoring tended to say they would feel safer knowing that the vehicle was monitoring them to ensure they were using the feature properly,” Mueller said. “That suggests that communicating the safety rationale for monitoring may help to ease consumers’ concerns about privacy or other objections.”

“Driver monitoring was generally seen as acceptable, although there was less enthusiasm for camera-based monitoring than for steering wheel sensor monitoring, which is to be expected given consumer concerns about privacy and user autonomy,” the study said. “Even so, attitudes and expectations around driver monitoring corresponded with the perception of being safer with it, given its purpose to help prevent drivers from misusing the technology.”

More than half of those surveyed said they would be at least somewhat likely to buy a vehicle with some form of automated lane changing if price was not an issue. Most of that group said they would prefer a hands-on version of the technology.

Last month, AAA released a survey showing that a large majority of consumers want auto manufacturers to focus their efforts on improving existing ADAS features rather than on developing self-driving cars.

In a consumer survey conducted online and over the phone, AAA said, 77% were more interested in improved vehicle safety systems versus 18% having an interest in autonomous vehicles (AVs).