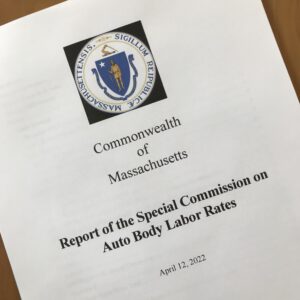 Legislation that would force insurers to increase Massachusetts’ lowest-in-the-nation auto body labor rate has been incorporated into the state Senate’s version of a $4.57 billion economic development package, which is currently before a House-Senate conference committee.

Once the majority of the six-member conference committee agrees on the language, the bill, a Senate redraft of H.5034, will only need final legislative approval and the consent of Republican Gov. Charlie Baker to become law.

The legislation would set a minimum hourly labor rate of $55, the first increase in more than three decades in the $40 rate paid by the state’s auto insurers.

The bill would also create an “auto body labor rate  advisory board” within the state’s Division of Insurance, which would make annual recommendations to the insurance commissioner. The commissioner would be required to set a “minimum hourly rate that insurers shall pay” within 30 days of the advisory board’s report.

One member each from the insurance and repair industries would serve as co-chair. They would choose four additional members: one from a vocational-technical school, two from consumer advocacy groups, and one economist with expertise in the insurance industry.

The Senate language is similar to that of HB 1111 and several similar bills that had been endorsed by the Special Commission on Auto Body Labor Rates in its final report to the Legislature. The commission was formed in late 2021 to address the state’s stagnant labor rate, and examine its effect on consumers, and on the collision repair and insurance industries.

The commission found that auto body labor rates “must be addressed,” and that maintaining the status quo is “not a viable option.”

Under H.1111, minimum adjustment rates paid by carriers to their insureds would be raised to account for nearly 30 years of inflation with the new rates phased in over two years. It would then be adjusted each year based on the consumer price index for the Northeast Region.

Evangelos “Lucky” Papageorg, executive director of the AASP-MA, said H.1111 stalled after moving to a third reading in the House, the final stop before a vote on final approval. While less than 1% of all bills filed make it to a third reading, H.1111 was “not allowed to come out onto the House floor for a vote,” Papageorg said. “It’s basically roadblocked.”

Over the course of two public hearings, the special commission heard testimony that the current $40 rate is discouraging new workers from entering the field and endangering the survival of the state’s auto body shops.

During testimony, repairers pointed out that insurers are willing to pay much higher rates for mechanical repair. As Repairer Driven News recently reported, according to Carlisle’s annual North American Service Benchmark, labor rates for customer-paid mechanical work are, on average, roughly $155 for premium brand dealerships and roughly $125 for non-premium brand dealerships.

The insurance industry did not respond to the commission’s request for potential solutions to the labor rate issue. “They were given ample opportunity to come up with other solutions, and they never did,” Papageorg said.

However, at least one insurance group has apparently launched a telephone campaign against the legislation.

Papageorg said he received a call, reportedly paid for by the American Property Casualty Insurance Association (APCIA), encouraging him to call his legislators in opposition to the legislation. He said he was told that the provisions would add “$150 to $175” to average annual auto insurance premiums in the state, a number never mentioned in any testimony before the special commission.

The caller urged him to contact the office of state Rep. Mark Cusak (D-Braintree), one of the three members of the House on the conference committee. Other state representatives on the committee are Aaron Michlewitz (D-Boston) and Michael Soter (R-Bellingham).

A representative of APCIA did not respond to a request for comment by RDN’s deadline.

At the same time, AASP-MA is encouraging people to contact those same three legislators to urge them to adopt the Senate language on the bill. The emailed message includes the telephone numbers and email addresses of the three lawmakers: Michlewitz, 617-722-2990, aaron.m.michlewitz@mahouse.gov; Soter, 617-722-2305, michael.soter@mahouse.gov; and Cusack, 617-722-2320, mark.cusack@mahouse.gov.

AASP-MA is also asking supporters to contact the leadership of the Senate, president Karen Spilka (D-Ashland), and Chairman Michael Rodrigues (D-Westport), to thank them for their efforts. Spilka can be reached at 617-722-1500 or Karen.Spilka@masenate.gov, and Rodrigues at 617-722-1114 or Michael.Rodrigues@masenate.gov.

Featured image: The cover of the Report of the Special Commission on Auto Body Labor Rates, released in April 2022. (Dave LaChance/Repairer Driven News)