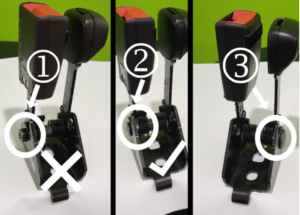 General Motors is recalling more than 480,000 SUVs to address a potential defect with the seatbelts in the vehicles’ third-row seats, while the National Highway Traffic Safety Administration (NHTSA) has opened a query into faulty seatbelt pretensioners on certain 2020-2022 Kia and Hyundai vehicles.

Customers who own a vehicle involved in the recall will be notified by mail, but they may also check their Vehicle Identification Number (VIN) for field actions in GM Owner Center at https://my.gm.com/recalls or via NHTSA’s website at https://vinrcl.safercar.gov/vin/.

If a vehicle fails the inspection, GM has instructed its dealers to advise the customer to not allow passengers to use the seating position that failed the inspection until the buckle assembly for that seat has been replaced.

The OEM told NHTSA that it opened a formal investigation on May 31, 17 days after a GM dealership received a customer report of a third-row seat belt buckle assembly that had separated in a 2021 Chevrolet Suburban.

GM’s field data analysis identified seven additional field reports received between October 2020 and June 2022 that were potentially related to this condition. The OEM said it is not aware of any accidents or injuries related to the issue.

An investigation by GM determined that “operators at the seatbelt buckle assembly supplier’s manufacturing plant may have not properly followed manufacturing processes and inadvertently missed the rivet forming operation,” according to NHTSA’s Safety Recall Report.

Dealers will inspect the rivet head formation on the seatbelt buckle assemblies, and replace assemblies as necessary at no charge.

GM has issued a service bulletin to its dealers outlining the proper procedure for inspecting the assemblies.

According to Mike Anderson of Collision Advice, all OEMs have issued procedures for thoroughly inspecting seatbelt systems that repairers must follow whenever a vehicle has been in an accident. Cadillac, Chevrolet, and GMC all include “The seat belts—Perform the seat belt operational and functional checks” in their position statements on “Repairs and Inspections Required After a Collision.”

If a shop finds a defective buckle assembly, it should suggest that customer call their local GM dealership and explain the issue, a GM spokesperson told Repairer Driven News. “While we haven’t formally launched the recall repairs yet, there are parts available to address a customer issue,” the spokesperson said. Safety recall repair work must be done by the dealer.

An April 2021 CRASH Network survey found that 60% of body shops have never asked to be paid for seatbelt safety inspections, Anderson said. He noted that’s of great concern to him because it suggests that shops aren’t inspecting seatbelts.

According to Danny Gredinberg of the Database Enhancement Gateway (DEG), any type of seat belt system inspection is a non-included operation in the CCC, Mitchell and Audatex estimating systems.

NHTSA’s Office of Defects Investigation (ODI) said that if the pretensioner ruptures it could release shrapnel, causing abrasions or other injuries.

Hyundai and Kia have issued five separate recalls from October 2021 to April 2022 concerning pretensioner ruptures. According to Hyundai’s documentation, the affected pretensioners include part numbers 88810-J0600, 88820-J0600, 88810-AA500, and 88820-AA500, all manufactured by Samsong Industries of South Korea.

Pretensioners use a tiny pyrotechnic explosion to help hold occupants against the seat belts and seats in crashes.

• If the rivet head is in place, no further action is required. Proceed to step 5.

• If the rivet head is not in place (1) and the vehicle is customer owned, return the vehicle to the customer, and advise the customer to not use the 3rd row seating position(s) on the side(s) that failed inspection. Proceed to step 5.

• If the rivet head is not in place (1) and the vehicle is in dealer inventory, hold the vehicle until remedy parts become available. Proceed to step 5. (Provided by GM)