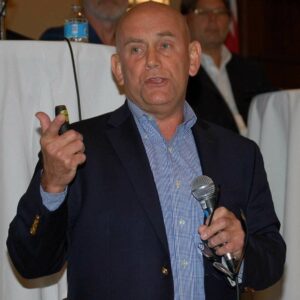 Terlep’s company was chosen for its product, Test Drive CoPilot, out of 100 competitors and he’ll go on to compete at the SEMA Show in Las Vegas on national television for a grand prize package valued at $92,000

Since 2013, the SEMA Launch Pad has served as “the ultimate product-pitching competition for the automotive aftermarket,” according to a SEMA news release. The four returning judges are Chip Foose, award-winning vehicle builder and artist best known from the TV hit series “Overhaulin’;” Jared Hare, an innovator and entrepreneur who founded Addictive Desert Designs in 2007 and has grown the company into one of the leading offroad brands; Myles Kovacs, a trendsetter who founded DUB magazine and launched TIS Wheels, and Alex Parker, industry advocate and CMO of the 2020 SEMA Manufacturer of the Year winner, Redline Detection.

“This year’s SEMA Launch Pad competitors were among the best that we’ve ever seen,” said Kovacs, in the release. “I’m constantly amazed at the ingenuity, passion, and drive we see from competitors. It’s going to be difficult to select just one winner from the group.”

When asked about his experience participating in the competition so far, which is his first time, Terlep compared the experience to going on the TV show “Shark Tank.”

“I had a great time,” he said. “The judges were awesome. All of the 15 people [semi-finalists] were really great and all of them had pretty cool stuff so I’m just honored to make it past the first 15.”

The 15 semi-finalists will have their products displayed in the Launch Pad Corral at this year’s SEMA Show in Central Hall booth #22970. The corral is meant to give competitors an exclusive opportunity to educate showgoers on their cutting-edge inventions through up-close interactive demonstrations or product displays, according to SEMA.

The other four finalists are Dustin Golat, co-owner of GolaTTaylor Tools; Jacob Hawksworth, CEO of Hypercraft; Susan Pieper, founder and CEO of DMOS Collective Inc., and Kevin Robinson, president of TRAC LLC. Two finalists will be announced on Nov. 2 to pitch their products on stage during the SEMA Awards Banquet on Nov. 3.

As far as tips for companies who might consider competing in the Launch Pad in the future, Terlep said just go for it. “If you don’t play the lottery, you can’t win. If you don’t sign up to participate, you can’t win so you’ve just got to go for it. And, in my opinion, you’ve got to have a unique solution. We feel pretty good about our Test Drive CoPilot.”

The product, he said, is designed to validate that vehicle ADAS systems are working and calibrated correctly. “I don’t care if there’s no DTCs on the diagnostic tool or the calibration tool says it’s calibrated, you must take the vehicle on the road to validate that those systems work. So, Test Drive Co-Pilot, all based on a mobile app, provides the person who’s going to validate that the ADAS systems work with all of the OEM verification procedures from the OEM repair procedures in the owner’s manuals — it guides them through what to do — and then it records and documents audio, video — everything related to that post-calibration test drive, and then provides detailed documentation.”

If he wins, Terlep said with a chuckle that the first thing he’s going to do with the winnings is to take his wife out to dinner for “putting up with everything since we started the company three years ago.”

The rest of the money will be used on marketing Test Drive Co-Pilot, he said.

Also, if you’re planning on opening an ADAS calibration center or offering calibrations at your shop, be sure to check out Terlep’s Repairer Driven Education session “How to Open and Operate a Successful ADAS Services and Calibration Business” on Nov. 1. Terlep said he’ll cover all the intricacies of running an ADAS calibration center from what the building should look like to marketing, customer management, investment, and more. To explore the RDE track in more detail or to add sessions to your Show Planner, visit SCRS: Repairer Driven Education on the Map Your Show site.

Terlep also had two tips for making the most out of the SEMA Show — bring really comfortable shoes and make sure you find the time to walk the show. “If you like cars, and if you like the automotive industry, this is the place to be. I remember the first time I went there, I was like a kid in a candy store. It’s so cool, it really is. It’s a great place to catch up with everybody if you can find the time.”