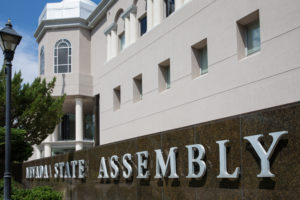 Nevada Collision Industry Association President Matt Gondini said “the reception has been great so far” from the collision and even auto industry to a bill requiring OEM part and procedure usage by insurers.

Gondini (Fix Auto Las Vegas East) said Wednesday that Honda supported the bill, and the NCIA was reaching out to other OEMs to testify on behalf of it. He said he thought “it’ll strengthen” the effort to have automakers appear at the Nevada Capitol.

He stressed throughout the interview that Assembly Bill 173 was a consumer bill, at one point noting members of his family would be on the road.

He said that LKQ is resistant to the measure, which would prevent an insurer from using aftermarket parts on vehicles younger than 5 years before the crash without written consent. However, insurers had so far been quiet, he said Wednesday, though he noted the bill had only been filed Monday.

“We’re waiting for that shoe to drop,” Gondini said.

Using OEM parts on newer vehicles mattered for leased vehicles, according to Gondoni. Nevada new-car dealers supported the bill, and the use of aftermarket parts on leased vehicles affected their ability to sell the cars as certified pre-owned, according to Gondini. Customers also could be penalized under a lease were they not to use OEM parts, and he said NCIA members had reported complaints about this issue from customers.

Nevada statute already required insurers to disclose on an estimate the use of an aftermarket “body part,” but no written consent was required. However, body shops were required to both notify consumers of aftermarket and recycled parts and get written consent to use them.

Gondoni said the measure was “flipping the script” — it no longer was up to the shop to explain the existence of aftermarket parts, he said.

The association originally wanted more than a 60-month option for consumers to have OEM parts, but it settled on 5 years out of a desire to be fair, according to Gondoni. He said the length of time was meant in response to lease and loan terms, earlier observing that the motorist technically didn’t own a financed or leased vehicle.

The bill also appears to expand notification and consent requirements to all parts, not just the limited concept of a “body part.”

The bill enacts into law what’s already expected of repairers under Nevada statute and what the Division of Insurance already said is necessary of insurers: You must follow OEM repair procedures.

“An insurer shall not require any body shop or garage to repair a motor vehicle in a manner which is contrary to the recommendations of the manufacturer of the motor vehicle,” the bill would add to NRS 690B, a statute which also includes Nevada’s antisteering law.

“If an insurer does not provide the required disclosures or refuses to authorize repairs in accordance with (OEM) specifications and/or repair-industry standards, the insurer is engaging in unfair claims-settlement practices as defined in NRS 686A.310,” Richardson wrote at the time.

Richardson’s property and casualty chief insurance examiner Rajat Jain also last year refused to tell the Society of Collision Repair Specialists whether the agency considered it “reasonable” that an insurer reimburse the cost of following OEM repair procedures — even though he cited the 2016 bulletin in his communique to the trade group.

“”Repair procedures and instructions are not within the Division’s purview,” Jain wrote to SCRS. “The terms and benefits stated in the policy would be reviewed.”

Be heard: Nevada legislator contact information can be found here and here.