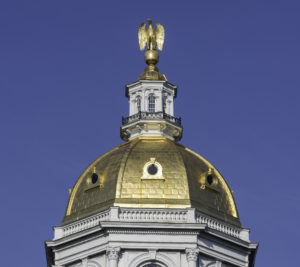 The 16-4 vote to support the modified House Bill 664 incorporated language excluding OEM statements on parts from the bill’s scope. The New Hampshire legislative website describes the minority as perceiving the bill as “Inexpedient to Legislate.”

The additional language hammering the point home for insurers on scanning, calibration and diagnostics is also similar to the wording the Alliance proposed for Connecticut.

It’s unclear if the trade group contributed language in either of the other two new passages the New Hampshire committee’s version would add to law.

The committee supported new language granting insurers a pass when reimbursing consumers or auto glass repairers — particularly with regards to advanced driver assistance system calibration. The only requirement is that an unspecified “company,” presumably the glass shop, must tell the customer if they calibrated something.

“This section shall not apply to vehicle glass repair and emplacement services including, but not limited to, the calibration of Advanced Driver Assistance System (ADAS), when done by an automobile glass company,” the new HB 664 407-D:3-b Section II states. “The company shall notify their customer after repair whether calibration has been performed.”

This is similar to an exemption granted in a 2018 Rhode Island bill, now law, requiring insurers to reimburse OEM repair procedures in certain circumstances. Safelite had in Rhode Island successfully fought to have its sector excluded, noting the existence of the ANSI AGRSS standard; find out more about the glass industry-OEM procedures issue.

Finally, the New Hampshire bill also creates a 407-D:3-c that insurers recognize a repairer’s paint and materials estimate or provide a comparable one from another reputable source.

The first version of New Hampshire House Bill 664 simply declared “an insurer shall reimburse a repairer for all repairs if a repairer follows original equipment manufacturer recommended collision repair procedures, recommendations, or service bulletins while repairing a vehicle” and established this would take effect 60 days after passage.

Many automakers have publicly recommended only new OEM parts be used, noting that they can’t vouch for the vehicle if alternative components are substituted. This has drawn opposition to other OEM procedure bills like HB 664 from alternative parts giant LKQ and other recyclers on the grounds their inventory would effectively be banned. An exception would seem to solve that problem.

LKQ, for example, disputes OEM recommendations related to part selection, but it doesn’t dispute the OEM instructions on how to install the part in question.

However, the new HB 664 doesn’t address OEM prohibitions on recycled or remanufactured parts, and the aftermarket parts language’s specificity might be confusing when insurers and repairers seek to interpret it.

As noted above, the amended HB 664 dictates “governance of the use of after market parts in the course of an insurer-funded repair shall be solely dictated by RSA 407-D:3-a.”

I. No insurer of private passenger automobiles shall require or specify the use of after market parts on:

(a) Vehicles that have been placed in service within the immediately preceding 2 years and that have 30,000 or fewer miles recorded on the odometer; or

(b) Leased vehicles if the lease provides that such parts will cause a diminution of the residual value of such vehicle.

II. In this section, “specify” includes writing repair estimates on the basis of the cost of after market parts or otherwise declining to pay for the cost of original equipment manufacturer replacement parts.

But the rest of Section 407-D also has some important consumer provisions as well. These include notice that the parts were used and requirements that the aftermarket part be “like kind and quality” and the insurer “consider the cost of any modification” necessary because of them. It’s unclear what the narrow reference to D-3a here would mean for them.

The new bill seems to alleviate in part and preserve in part concerns by the Auto Body Association of Connecticut. The trade group opposed the initial version of the bill, arguing that while it supported OEM repair procedures, the insinuation that the insurer owed the repairer rather than the customer was bad policy.

“Insurance companies are legally obligated to indemnify their insureds or the victims of their insureds,” ABAC wrote. “Creating language that would make an insurer directly obligated to pay an auto body repairer misunderstands the dynamics of the relationship and each party’s respective obligations. This is problematic because it suggests that insurers should have a greater degree of control in the repair process, something we have fought for many years.”

“I do understand their argument,” lobbyist Robert Redding Jr., whose Automotive Service Association pushed for the original version of HB 664, said in an interview late last month. However, he said the ASA supported addressing the issue as simply as possible. Follow OEM procedures, and “you get paid,” he described it later.

The amended House Bill 664’s language addresses the ABAC’s complaint to some degree by mentioning the claimant, though it still describes the insurer paying the repairer, particularly in the new language related to following OEM diagnostics and calibration procedures.

The New Hampshire Capitol is seen in 2015. (gnagel/iStock)