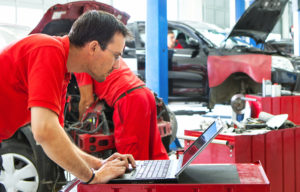 The American Property Casualty Insurance Association told a Connecticut House committee earlier this month that “insurers would agree that the manufacturer’s technical repair specification requirements should be followed.”

This testimony regarding Raised House Bill 7266 is a welcome acknowledgement of what the three main auto body repair trade groups and I-CAR have for years said should be the standard of care. The courts and common sense also support this premise, and at least one shop has reported garagekeepers insurance carriers — the malpractice insurers of the auto world — demand repairers adhere to auto manufacturer repair procedures.

“With members comprising nearly 60 percent of the U.S. property casualty insurance market, APCIA represents the broadest cross-section of home, auto, and business insurers of any national trade association,” the March 7 statement to the Connecticut House Committee on Insurance and Real Estate describes the organization.

Connecticut Raised House Bill 7266 would require body shops to follow OEM procedures unless the customer provides written authorization otherwise. It also would bar insurers from policies which “require a motor vehicle repair shop, as defined in section 14-65e of the general statutes, to deviate from the collision repair guidelines, procedures, recommendations and service bulletins issued by the vehicle or original equipment manufacturer.”

However, the APCIA — created by a Jan. 1 merger of the Property Casualty Insurers Association of America and the American Insurance Association — did qualify its support for OEM procedures in its March 7 letter opposing the bill.

Not surprisingly, a big concern surrounded the fear manufacturers would ban aftermarket parts:

While insurers would agree that the manufacturer’s technical repair specification requirements should be followed, the language in this bill would go far beyond that – requiring compliance with all “collision repair guidelines, procedures, recommendations and service bulletins issued by the vehicle or original equipment manufacturer”. It is important to note at the outset that there is a major difference between manufacturers’ recommendations versus requirements. Most manufacturers have a plethora of various recommendations, many of which have nothing to do with vehicle safety. For example, every original equipment manufacturer (OEM) recommends that only OEM parts should be used. Accordingly, this bill would result in a constructive complete ban on aftermarket parts in the state of Connecticut.

OEMs do recommend against using anything other than their new parts, arguing that they can’t vouch for anything else. Using anything other than new OEM parts shifts the liability to the repairer, though alternative parts giant LKQ in 2012 announced it would indemnify repairers for any failure of its merchandise under its “Promise of Protection.”

The Auto Alliance in prepared testimony to the committee offered an amendment specifically exempting parts from HB 7266’s provisions.

“Based on our advocacy for this issue in other states, I am aware that some will argue that automaker interest in this issue is only to sell more genuine OEM parts,” Auto Alliance state government affairs senior director Wayne Weikel’s written testimony states.

“While Alliance members absolutely believe all consumers would be best served by using genuine OEM parts on their vehicle – parts which have been designed and tested in the same manner as the original parts on the vehicle – that is not our fight on this bill.  This legislation is about safe and proper repair of all vehicles after a collision.  To show that our intentions on this are true, I have attached to this testimony a proposed amendment, which would stipulate that, regardless of any language contained in an OEM repair procedure to the contrary, the use of replacement parts in an insurance-funded repair shall be governed by solely by Connecticut’s existing law on the subject, Chapter 700, Section 38a – 355.” (Emphasis his.)

The proposed amendment would expand the bill’s Section 1 regarding insurers with language including:

The APCIA also warned about other OEM recommendations not related to “technical repair standard,” such as OEMs recommending networks of certified collision repairers.

That’s an interesting point, though it’s a little alarming an insurer wouldn’t want to use an OEM-recommended facility given such networks’ current emphasis on quality and capability, not to mention breadth. (It’s not like Nissan, for example, makes you ship its cars back to Japan. It recommends a network of more than 1,500 dealership and independent facilities all confirmed to have the tools and training to fix Nissans.)

“While the potential impact of this legislation on the price of auto repair parts is quite concerning, it is just the beginning of the concerning aspects of this bill,” the testimony stated. “OEM recommendations are not limited to parts and include missives that stray from what one would think of as technical repair standard to promoting its own products and services such as only using shops or equipment recommended by the OEM. This would take the ability away from the insurer to negotiate a fair and reasonable price for auto repair services. This is because the insurer would simply be required to reimburse for all repairs as long as the original equipment manufacturers recommendations were followed and there would be no ability to rebut the repair shops determinations. Auto insurers have a strong belief that they have a role to play in ensuring that the vehicle owner receives a quality repair that is safe and cost effective, and proposals like this, well intended as they may be, will be used as leverage to push the insurer out of the process, save to pay the inflated bill.”

This is disengenous for three reasons. First, OEMs compete on cost of ownership and have a stake in ensuring their vehicles aren’t more expensive than competitors. Automakers repeatedly have described meeting with insurers to discuss technical issues related to cost of repairs. Second, the insurer and policyholder both know premiums and repair costs have a clear ceiling — the insurer’s right to total the car. The carrier knows the maximum it will have to pay. (Speaking of that, shouldn’t premiums decrease over time as the insured vehicle depreciates? The carrier’s maximum comprehensive and collision risk by definition is falling. Maybe that’s in part how switching saves money.)

Most egregiously, this presupposes insurers have a role in dictating how a vehicle should be repaired despite taking on none of the liability. The repair is between the customer and the body shop, and the customer owes the shop. What the customer is reimbursed for the cost of the loss is between the insurer and customer. The Auto Body Association of Connecticut raised this point in its call for changes to HB 7266.

Be heard: Connecticut lawmaker information can be found here.

The American Property Casualty Insurance Association told a Connecticut House committee earlier this month that “insurers would agree that the manufacturer’s technical repair specification requirements should be followed,” though it added caveats about other OEM recommendations. (gilaxia/iStock)

The Connecticut House of Representatives is seen in 2015. (gnagel/iStock)