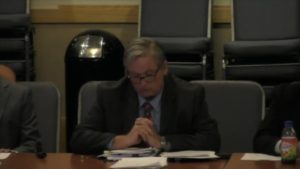 Citing the safety role of the material, the California Bureau of Automotive Repair has proposed amending the definition of “Crash part” to include “bonded glass.”

The existing 16 CCR 3303(o) declares, ‘Crash part’ means a replacement for any of the non-mechanical sheet metal or plastic parts which generally constitute the exterior of a motor vehicle, including inner and outer panels.”

Mark Guess of the BAR told an April 18 workshop said the agency focused on bonded glass because it was “so imperative” to vehicle safety. A passenger airbag deploying at high speed relied upon the windshield, and the glass supports the A-pillar as well, he said.

In response to a concern about repairer confusion with the term “bonded glass,” Guess said the agency was trying to include glass in the rear of the vehicle and quarter panels as well. Some OEMs have identified those panes as part of collision energy management too, he said.

Gene Lopez of Seidner’s Collision Center suggested a list of components rather than a general definition of “crash part,” though BAR Advisory Group member Jack Molodanof (California Autobody Association) pointed out that regulations take a long time — a list could sometimes be rendered obsolete “pretty quickly.”

Other states might want to examine if the BAR’s revision would be suitable for their jurisdiction. After all, the proposed regulation would amend language similar to that found in the National Association of Insurance Commissioners’ model regulation on “after market parts,” which the NAIC says is echoed by some governments.

The NAIC template defines “After market part” as “sheet metal or plastic parts that generally constitute the exterior of a motor vehicle, including inner and outer panels.” It also contains the “like kind and quality” notion which appears to be reflected and expanded upon by California’s insurance regulations.

In this vein, the California Department of Insurance or lawmakers might wish to revisit the “crash part” definition for insurers to keep it consistent with a rule for repairers that includes glass.

The fair claims settlement regulation 10 CCR 2695.2 only defines “Replacement crash part” as “a replacement for any of the nonmechanical sheet metal or plastic parts which generally constitute the exterior of a motor vehicle, including inner and outer panels.”

On the other hand, 10 CCR 2695.8 holds insurers to the same standard in writing estimates as body shops, so arguably the point could be moot.

BAR Executive Director Patrick Dorias kicked off the workshop by explaining that BAR hoped to update regulations iteratively rather than trying to attempt “everything all at once.” For example, items like ADAS weren’t even addressed in this round of proposed regulation revisions, he said.

The discussion April 18 suggested that California and other states might someday wish to revisit the overarching idea of “crash parts” altogether and what they hope to regulate with the concept.

The BAR workshop saw the agency seeking to define glass as a “crash part” because of its safety role. Yet other parts which might have a role during a collision and be frequently replaced after one aren’t included.

At least one repairer present expressed confusion over what constituted a crash part, which makes one wonder how well others in the industry — to say nothing of other stakeholders like consumers or insurers — could hope to understand it.

There’s also a question of what constitutes “non-mechanical.”

Here’s some moments from the workshop to illustrate our points:

• The BAR’s Jaime Ramos agreed that the definition of “crash part” would include a bumper fascia but exclude a bumper beam because the latter wasn’t external.

A radiator support, however, would count as a crash part because it’d be part of one of the inner panels included in the definition, Ramos said.

This ran contrary to Lopez’s earlier suggestion during the hearing that a radiator core support wouldn’t be a crash part.

• A radiator or condenser “on the repairer side” would be crash parts, Lopez also said — only to be contradicted later by Guess, who said they weren’t. Another audience member who’d asked earlier where they’d fall also argued that neither was mechanical, which under CCC’s energy-transfer definition of “mechanical” might be incorrect.

“A headlight today could be very mechanical,” Lopez pointed out.

• Advisory Group member Dave Robinette (I-CAR) said the “usual vernacular” would find a “crash part” referring to energy management. Glass had grown to become a “stabilizing part of the structure,” he said.

“I think you’re right,” Robinette said. Some components weren’t structural or “weight-bearing” yet still had a “bracing effect” on the vehicle’s strength, he said: A quarter panel was a “flimsy piece of metal” until it was attached.

He said energy management could be one way to classify a crash part, while other parts might be “secondary, bracing, structural” crash part like a roof, quarter panel or radiator support.

“That could be easily a contributing component but not necessarily a structural part,” Robinette said.

The term “‘crash part'” might need a “subdefinition,” he said.