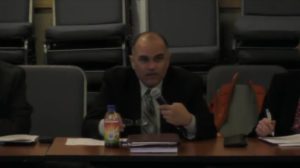 The definition of “crash part” itself would expand to include “bonded glass.” It currently encompasses “any of the non-mechanical sheet metal or plastic parts which generally constitute the exterior of a motor vehicle, including inner and outer panels.”

Mark Guess of the BAR explained at an April 18 workshop examining the new proposed regulations that the language was a response to vague terms like Opt-OEM. In addition, some automakers don’t authorize their own parts when sold outside of the regular supply chain, he said.

The BAR last year had reiterated and clarified that parts defined with vague terms like “Opt-OE” shouldn’t appear on shop estimates. The California Department of Insurance said the same for insurer estimates.

Business and Professions Code 9884.9(c) would still apply after the proposed change to California Code of Regulations Title 16, Section 3303. Parts would still have to be identified as “new, used, rebuilt, or reconditioned,” Guess said.

BAR representative Jaime Ramos said April 18 the proposed regs allowed for parts to either be recognized by the OEM or sold by an authorized distributor so repairers had multiple ways to check if a part was OK.

Gene Lopez of Seidner’s Collision Centers said the definition would “hamstring” repairers, for some automakers have surplus parts they sell to third-party distributors and consider to be acceptable.

Ramos said any regulation would have pros and cons, but something was necessary to provide clarity for the body shops and third-party suppliers who’ve requested it from the BAR.

“It’s a hot topic,” he said. But the agency had to categorize the term instead of allowing “a bunch of loopholes” and “5 million different categories.”

“We have to really find a way to put an end to it,” he said.

It still seems like the BAR’s definition would allow for official automaker surplus programs. After all, if it’s the automaker’s program and approved supplier, it seems as though the distributor would be “authorized” and the part “recognized” by the OEM.

What would definitely be prohibited are unauthorized third-party vendors calling unapproved parts OEM. Ramos said some automakers questioned why something they didn’t recognize was allowed to be called an OEM part. Toyota, he said as an example, holds that if the part wasn’t bought from a dealership, “‘it is not their part.'”

Toyota doesn’t accept a third-party vendor selling the part and calling it OEM, which would be allowed under the current regulation, according to Ramos.

“They have to recognize it as their own” under the regulation, Ramos said, and said he thought this was a “good starting point,” though the BAR was open to more input. If you want to provide comments, contact Michelle Oberg, 916-255-0911, Michelle.Oberg@dca.ca.gov, or Guess at 916-255-4516, Mark.Guess@dca.ca.gov.

Ironically, the April 18 BAR workshop discussing the definition came the same day as the Collision Industry Conference discussed the contentious issue of what qualified as an OEM part.

Parts and Materials Committee Co-Chairs Aaron Schulenburg (SCRS) and Ken Weiss (SSF Imported Auto Parts) described having reached an impasse, though one in which both parties were extremely respectful of the other.

“This is where we’re stuck,” Weiss said.

Based on the CIC discussion April 18, the Parts and Materials committee agreed that a new OEM part met the following definition: One made for or by the OEM for the specific market that was sold through the authorized OEM supply channel, warrantied by the OEM, and still in the original OEM packaging.

The debate surrounded what to call a part when not all of these criteria were met, according to Schulenburg. He said warranty and supply channel were the key sources of controversy.

SCRS’ view, Schulenburg said April 16, held that all four of the criteria needed to be met to call something new OEM. Weiss felt otherwise.

In terms of the two sticking points mentioned by Schulenburg, the notion of an OEM warranty wasn’t discussed in the proposed regulation, but supply chain obviously is. However, the definition proposed in the new regulation does seem for practical purposes to eliminate many scenarios in which a part sold with a third-party warranty instead of an automaker’s could still be considered “new OEM.”