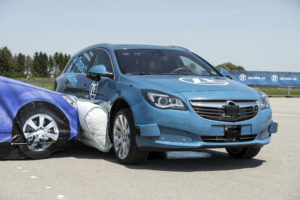 With the Insurance Institute for Highway Safety poised to toughen up its side-impact crash test, Tier 1 supplier ZF on Wednesday highlighted a prototype of an external airbag intended to fire before a crash.

ZF predicted the safety feature could cut injuries from side-impact crashes 40 percent and “the penetration of the intruding vehicle by up to 30 percent.”

The company said side-impact crashes make up nearly a third of all occupant fatalities in its native Germany, and the IIHS attributes about a quarter of all deaths to the collisions.

“Protecting people in side crashes is challenging because the sides of vehicles have relatively little space to absorb energy and shield occupants, unlike the fronts and rears, which have substantial crumple zones,” the IIHS wrote. “Automakers have made big strides in side protection by installing side (internal) airbags and strengthening the structures of vehicles.”

Side-impact fatalities recently plateaued and then rose after years of declines, and the IIHS expects to revise its more than a decade-old side-impact test. Potential changes could be a heavier and less uniform-shaped barrier and a faster crash-test speed — both of which would better account for real world conditions.

The airbag would fill with between 280-400 liters of air (5-8 times a steering column airbag), depending on the vehicle size. It “expands upwards from the side sill to form an additional crumple zone in the door area between the A and C pillars,” according to ZF.

ZF said the vehicle uses radar, lidar and cameras to sense signs of a collision and algorithms to decide if a crash would occur and if it’d be a good idea to fire the airbag.

“The system has approximately 150 milliseconds to make the decision to deploy the airbag and fill it – roughly the amount of time it takes a person to blink,” ZF wrote in the news release.

It called reliable crash detection and successfully beating the collision with a deployment the “biggest challenge” of inventing the airbag system.

The company demoed the technology live in Memmingen, Germany. Based on images released by the company, it appears to have worked.

“We highlighted that this safety system has the potential to significantly reduce occupant injury severity in cases of side impact collisions,” ZF safe mobility systems head Uwe Class said in a statement.

The tech will be interesting to watch should it reach the market. A big honking airbag blowing out of the car seems poised to add severity — but a 30 percent reduction in intrusion seems poised to subtract it and perhaps even shift some “replaces” to “repairs” or “undamageds.” Cutting injuries by 40 percent also would seem to help insurers come out ahead on the technology by reducing medical bills.

Of course, proper sensor and module repair, replacement and recalibration will also take on an additional layer of importance, both in preserving the safety functionality of the system but also in ensuring it doesn’t fire for a false positive. An ADAS system which beeps at the driver, hits the brakes or countersteers for a false positive is a problem and a safety risk, but at least it doesn’t blow an expensive airbag out the side of the vehicle unnecessarily.

The crash prediction used on the airbag could be adapted to improve other safety technology as well, according to ZF. “For example, the ACR8 Active Control Retractor can warn the occupants or help secure them in a safe position in the critical fractions of a second before the collision,” the manufacturer wrote.

The external side airbag isn’t the only new supplemental restraint system ZF could bring to market. Find out about other possible new airbags with our December 2018 coverage here.

Tier 1 supplier ZF on June 5, 2019, highlighted a prototype of an external airbag intended to fire before a crash. (Provided by ZF)

A ZF diagram shows a airbag blowing out from the side of a vehicle to “serve as an additional crumple zone.” According to the manufacturer, it might be able to cut injury severity “up to 40 percent.” (Provided by ZF)