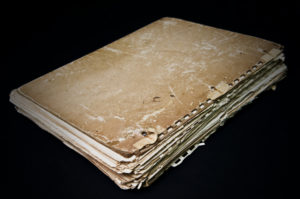 Auto body labor rate survey data made available earlier this year by the California Department of Insurance reveals numerous carriers who haven’t updated their study in more than two years.

Granted, as the CDI pointed out this month, just because an insurer conducted a survey in the past doesn’t mean it’s still using those results.

“However, our practice is to provide all surveys in our possession that have not been superseded by more recent surveys by that same insurer,” the CDI wrote in an email. “… However, this does not mean that the insurer is currently using that survey to pay collision repair claims, or that the survey is resulting in fair and equitable prevailing labor rates.  We would have to look to the specific survey and how it is currently being used.”

Using the older “prevailing rate” results and survey data to measure the validity of a body shop’s hourly charges in 2019 would seem to be inappropriate and unfair to the repairer and consumer. (Or potentially the insurer, if local door rates have fallen in the area!)

The CDI results also show many insurers haven’t even conducted a survey at all. This suggests they have even less grounds to object to a body shop’s door rate as unreasonable for the market.

The California Department of Insurance in 2016 addressed the problem of insurers generating “artificially inaccurate, unreliable, and unreasonably low labor rates that are not representative of the market” by providing a template survey and methodology that could guarantee an insurer a “rebuttable presumption” of good faith.

The regulations for practical purposes took effect in early 2017, and multiple insurers have chosen to use the CDI’s suggested option — perhaps most notably No. 2 GEICO.

To count as a standard labor rate survey and trigger the automatic good-faith assumption, an insurer’s results from shops can’t be older than 16 months, and no more than a year can have elapsed from the time the CDI received that data.

However, the CDI will still count surveys it received within the last two years so long as the labor rate data isn’t older than 28 months and the carrier adjusts labor rates for California’s inflation. (Carriers would use the California Consumer Price Index, not the national inflation rate.)

No insurer is required to use the standard survey format (the CDI has received other methodologies) — or even to conduct a survey at all. 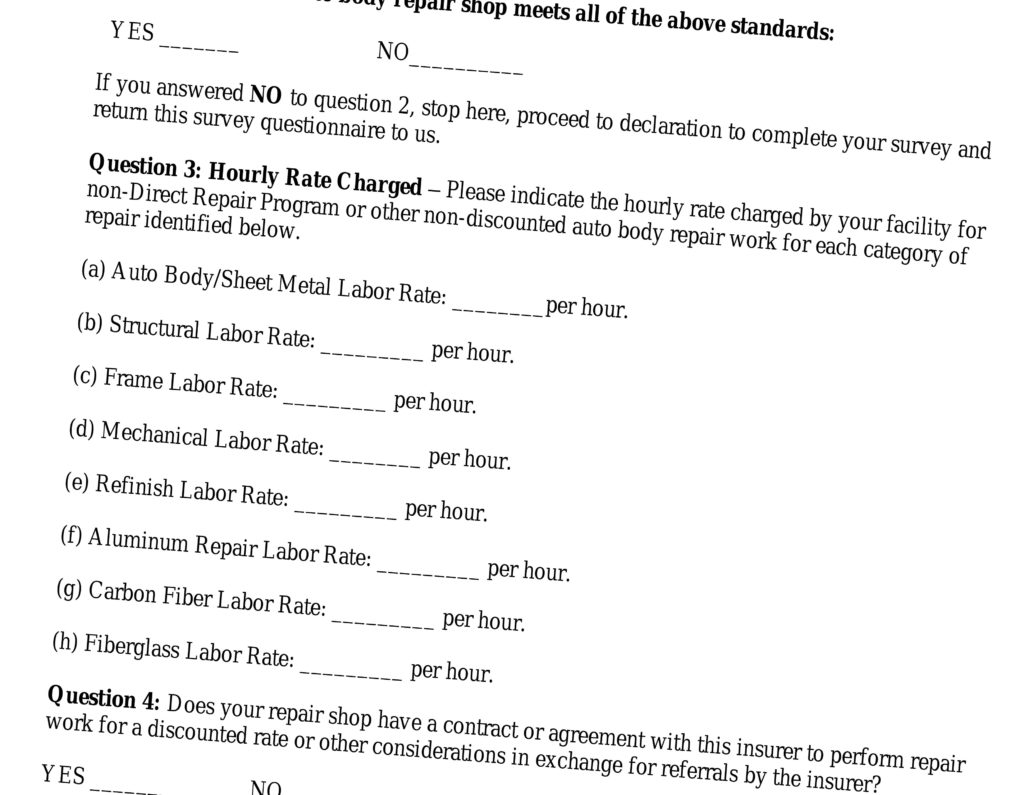 CDI doesn’t technically “approve” anything submitted except to check for reporting requirement compliance, the agency confirmed. It said it only scrutinizes the results when it receives a complaint about a survey.

“There is no current law that permits the CDI to formally and affirmatively approve Labor Rate Surveys,” the CDI wrote in an email. “However, CDI does review these surveys when they are submitted to CDI, even before any complaints are filed, in order to determine if it complies with the regulations (Section 2698.91. Reporting Auto Body Repair Labor Rate Surveys) that proscribe how the survey is required to be reported to CDI and the types of information that is required to be submitted in the survey. Then, subsequently, if CDI receives a complaint regarding a specific survey, it will look at the specific issues raised in the survey (i.e. specific market, response rate, inaccurate math, etc) to determine if the survey resulted in fair and equitable payment of the labor rate component of collision repair claims in that market.”

However, the CDI’s regulation seems to provide shops, insurers and consumers with perspective on when an insurer’s data is wearing out its welcome.

“But, if the insurer is using a Standard Labor Rate Survey and following the Standardized Auto Body Repair Labor Rate Survey Regulations, then yes, there is a specific shelf life of those surveys and the data,” the CDI wrote. “If the Standard Survey becomes stale, at a minimum, it will no longer be a Standard Survey and will not receive the benefit of the rebuttable presumption.  CDI has taken issue with surveys in the past that were too old to be considered valid for purposes of paying collision repair claims.”

In announcing the initial draft of the survey regulations in March 2016, the CDI wrote:

The Department recognizes that overhead, repair methods, and other costs that go into determining the labor rate charged by repair shops change over time. Survey data may become stale and not properly represent the going market rate for repairs. Due to the rapidly changing innovations in novel alloys, and other aspects of newer car models, auto body shops struggle to keep abreast with ever-changing equipment, training, and methodologies to meet consumer demand and new technologies. Also, employee wages, benefits and material costs increase over time and due to market forces. These factors may result in rapidly increasing costs to auto body shops, which drive up the labor rates charged to consumers for repairs. Many complaints to the Department’s Consumer Services Division and correspondence from auto body shops report documented instances where insurers use survey data that is several years old and no longer reflects the prevailing market rate in the geographic area to settle claims. Because some insurers are relying on old surveys and data, there is a gap between what the insurer is willing to pay and what the auto body shop is actually charging, resulting in out-of-pocket costs to Consumers. 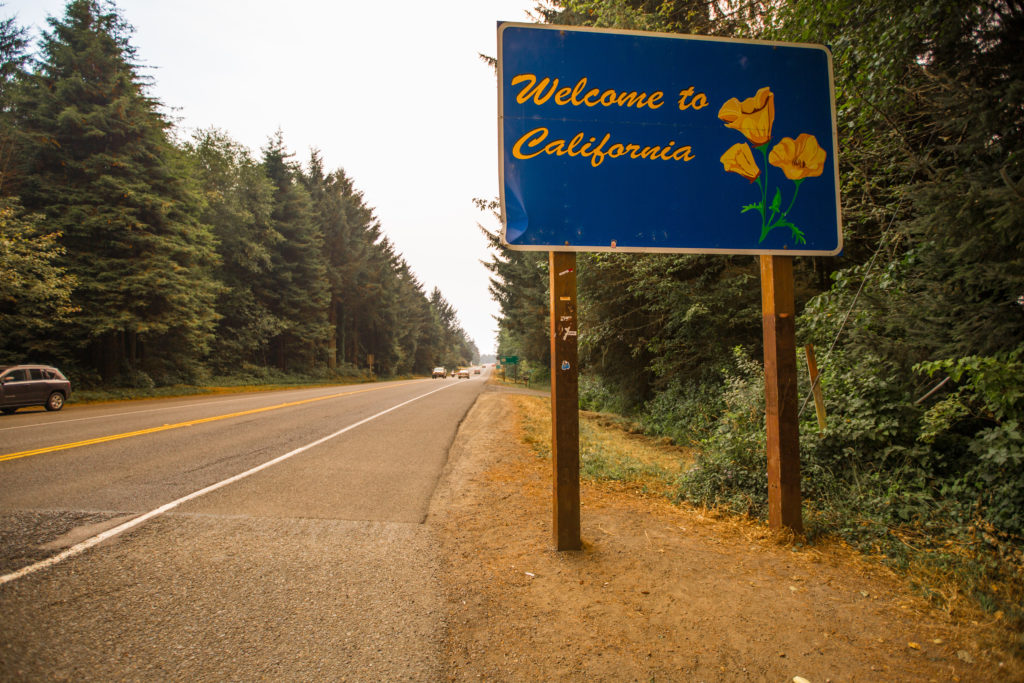 Farmers is particularly noteworthy in that it provides an example of a carrier using CDI’s methodology for extending the life of a survey by adjusting rates based on California inflation. The carrier in a June 19, 2018, letter said it raised rates surveyed in 2017 by 3.5 percent for 2018.

Which brings us to the multiple carriers who have conducted surveys in the past but don’t seem to have done anything for 28 months or more.

The last results from CSAA — the No. 5 auto insurer in California, according to the Insurance Information Institute — date to 2016.

In a letter dated March 7, 2016, CSAA said it polled 1,259 non-DRP shops and received 396 responses in 2013. It updated the data for 2016 using the national Bureau of Labor Statistics Consumer Price Index.

The carrier also said the survey couldn’t be used for prevailing rates in 11 counties. “Labor rates in these areas will be negotiated on a shop-by-shop basis.”

It’s unclear if CSAA’s results are in use by AAA affiliate and No. 5 California insurer Auto Club Exchange Group, which isn’t specifically named in the list of public records provided by the CDI.

Some insurers only have survey results from more than a decade ago.

The CDI also provided a March 9, 2004, letter from GMAC insurance — now National General, the nation’s No. 14 carrier — discussing a labor rate survey of “twelve local shops” in the area of PJ’s Auto Body, the shop used by two GMAC policyholders who’d filed a complaint with the CDI.

It’s also worth mentioning major insurers for which no public survey records are available at all. As noted above, this would seem to suggest the insurers would have an even more difficult time disputing a collision repairer’s rate.

California No. 8 carrier Kemper and No. 10 carrier USAA — both national names as well — aren’t to be found in the CDI’s public records. Looking to the Top 10 national carriers, we find No. 9 Travelers also missing.

Labor rate survey data might be too old to reflect the current market. (jfmdesign/iStock)

A sign welcoming visitors to California is shown. (Jorge Villalba/iStock)