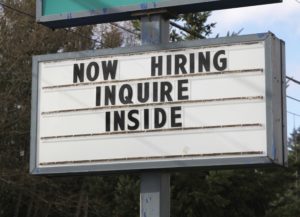 A Raymond James and Supplement Advisory study of 157 businesses in the collision ecosystem found the tech shortage “could finally be stabilizing—or perhaps even improving on the margin (becoming ‘less worse’).”

The report published Tuesday ahead of the Boyd Group’s earnings release also found improved pay and benefits as two popular strategies for addressing the shortage.

“While labor/technician shortages remain a key pain point for the industry, our survey data suggests this issue could finally be stabilizing—or perhaps even improving on the margin (becoming ‘less worse’),” Raymond James Canada analyst Steve Hansen wrote. “Specifically, we highlight that our 2Q19 net survey score improved sequentially to (1.5), a modest improvement over (1.7) in 1Q19, and material improvement vs. the (2.1) endured in 3Q18. Underpinning this improvement, we note only 35% of respondents indicated that conditions worsened in the period (vs. 1Q19: 40%), with 60% feeling availability held roughly the same.”

However, it’s clear from the responses to the survey question “What other factors/issues are keeping you up at night (if any)? Feel free to elaborate on any of the issues highlighted above or other industry trends (i.e. ADAS, OEM certification)” that the tech shortage is still a pain point.

Among the labor-related comments shared by Hansen:

Improved benefits to attract technicians has remained consistent over the past year, Hansen wrote.

“From a mitigation standpoint, while respondents continue to deploy an array of strategies to address this issue, we note that ‘Better Pay’ and ‘Career Planning’ continue to be the preferred mitigation strategies, although both have been fading in recent quarters, while ‘Enhanced Benefits’ has remains consistent for several periods,” Hansen wrote. 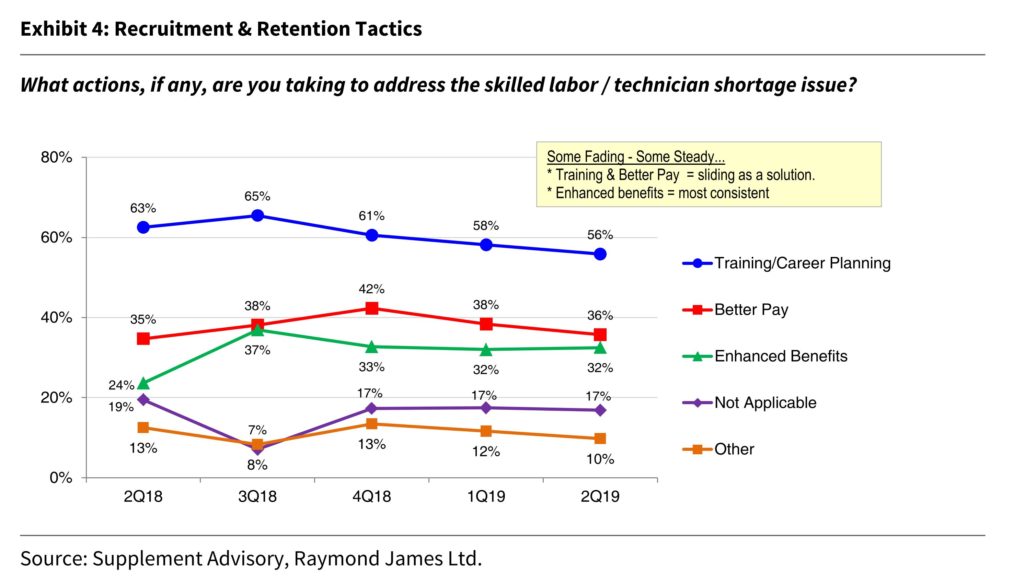 Less than 3 percent of the industry offers zero benefits — down from 19 percent in 1995 — according to the 2019 Collision Repair Education Foundation and I-CAR study.

The Society of Collision Repair Specialists recently launched an opportunity for members to team up and offer 401(k)s at a potentially lower cost and liability than if the business tried to go it alone on retirement benefits. It’s also working on a similar association health insurance plan.

The Boyd Group’s earnings report Tuesday and investor call Wednesday indicated that offering more to technicians might have paid off at Gerber Collision, a Boyd subsidiary and significant revenue source for the company. However, it also offered an interesting case study for the industry on how one benefit — increasing tech vacation — can both help and hurt a shop.

Boyd Group same-store sales are up 5.2 percent for the six months ending June 30 for a total of nearly $937.8 million CAD — despite data showing auto body claims nationally were down in the first and second quarter. The Boyd Group overall had done more than $1.1 billion CAD in sales by the halfway mark, driven by acquisitions of shops and their corresponding revenue and the same-store sales growth, CEO Brock Bulbuck said.

Bulbuck noted that the sales growth in the second quarter came despite a technician shortage. He said the company chalked up the growth to “a combination of continued strong demand and some modest growth in technician capacity and productivity over the prior year.”

The Boyd Group, which also owns Boyd Autobody and Assured Automotive, last year put half of the projected $11 million CAD savings from the U.S. tax cuts into better benefits for its technicians. It increased vacation and holiday pay for commissioned repairers, and it doubled its employer match and shortened vesting on repairers’ 401(k)s.

On a first-quarter earnings call, Bulbuck suggested the improved benefits had helped attract or retain enough technicians to eat into a backlog and contribute to same-store sales growth of 5.2 percent.

Apparently, the Boyd Group had either recruited or at least retained enough techs in the second quarter to report that “modest growth in technician capacity and productivity” over April-June 2018.

But it came with an interesting wrinkle.

“Entering the third quarter, although demand remains healthy in most of our markets, the challenges of vacation, combined with softness in some markets as well as stronger comps, has us starting the quarter with much lower same-store sales growth than we have achieved in the first half of the year,” Bulbuck said in a statement.

“We are well behind” where the company sat at this point last year, Bulbuck said on the earnings call. It’s the time of year vacations are common, and the Boyd Group would have to compare itself against strong numbers from 2018, he said. This would make it “very challenging” in the third quarter be on pace with its performance so far, he said.

“At this juncture, they are much lower,” he said of sales. 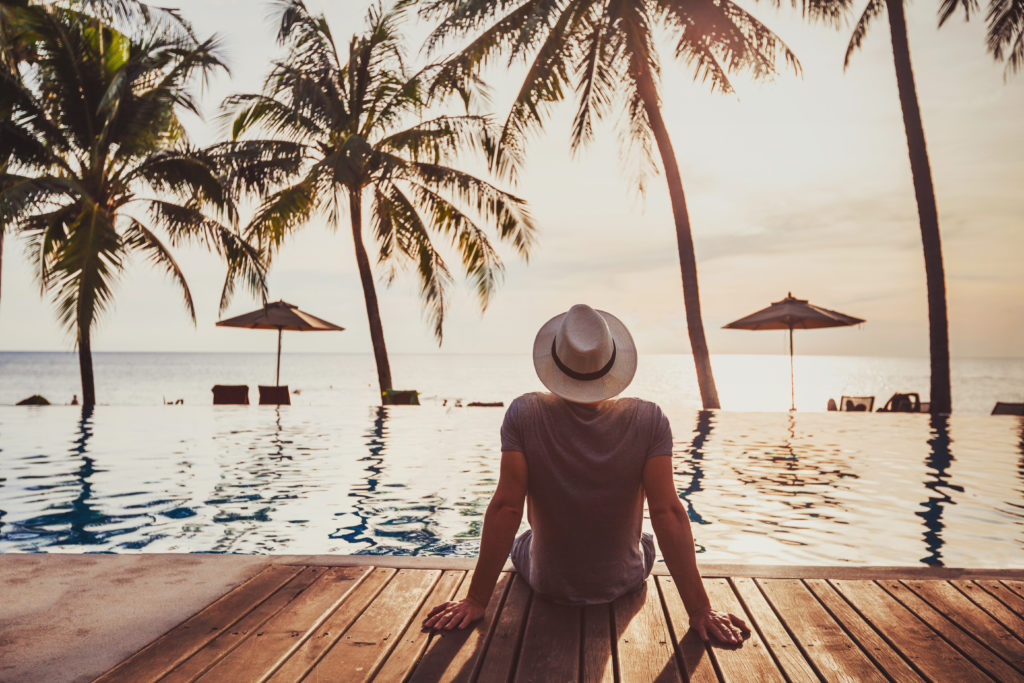 The company tries to schedule vacations in advance, Bulbuck said. However, in a tight labor market an employee can succeed in making a last-minute request for time off, according to Bulbuck.

“It’s difficult to be as disciplined as we would like to be,” he said.

He said that starting last year and continuing in 2019, vacations might have a larger impact on operations.

“They’re able to take vacations more readily from a financial perspective,” he said.

Asked if the bulk of the impact this year related to vacations, Bulbuck said, ‘I would say so, yes.”

Though “some pockets” of markets with weak demand existed, demand was mostly strong, according to Bulbuck.

The biggest lost opportunity so far in the third quarter — particularly in July — was vacations, Bulbuck said.

“We just couldn’t get the work through,” Bulbuck said.

Your collision repair business might not have short- or long-term investors poring over a single quarter the way Boyd does, and so vacation season might be slightly less of a hassle. Nevertheless, the Gerber parent’s experiences here should still get you thinking, whether you’re an employee, owner or manager.

For example: Do you offer better or at least equal paid vacation than your rivals amid the tech shortage? How will you handle last-minute vacation requests as an owner or manager? Do you even have a policy of scheduling vacations in advance, like Boyd does? How will you handle vehicle owners and insurers if a vacation-related bottleneck affects cycle time?

“Understanding the Benefit of Retirement Solutions for your Business”

The tech shortage remains a pain point for some auto body shops. (davelogan/iStock )

A Raymond James and Supplement Advisory study of 157 businesses in the collision ecosystem found the tech shortage “could finally be stabilizing—or perhaps even improving on the margin (becoming ‘less worse’).” The study was published Aug. 13, 2019. (Provided by Raymond James Canada)

A Raymond James and Supplement Advisory study of 157 businesses in the collision ecosystem found using benefits to attract technicians has remained consistent as a strategy over the past year. (Provided by Raymond James Canada)

A smaller percentage of shops reported offering life insurance and retirement in 2019 than in 2016, according to a Collision Repair Education Foundation and I-CAR study. (Provided by CREF)

Vacations can lead to a backlog at a body shop. (anyaberkut/iStock)