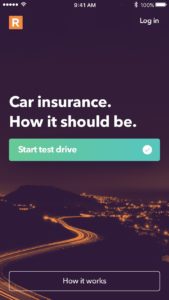 Smartphone telematics insurer Root on Monday announced it had raised $350 million in Series E funding, bring it up to a lifetime total of $523 million and another $100 million in debt financing.

The company also said it had expanded to its 29th state — making it accessible to more than 65 percent of American drivers — and wrote more than $187 million in premiums between January and June.

Root said the premiums demonstrated an 824 percent increase over the first half of 2018. In terms of geographic expansion context, it’s interesting to note that barely over two years ago, we were reporting on how Root had expanded into its sixth state.

“This latest round, led by DST Global and Coatue, raises Root’s valuation to $3.65 billion and provides additional capital to accelerate our industry-leading growth in existing markets while expanding into new states and developing new product lines,” Root wrote in a news release on Monday.

Clearly, both investors and consumers see value in the company, which sells insurance policies based partly on a test drive tracked by one’s smartphone.

“Root is transforming auto insurance, the largest property and casualty insurance market in the U.S., by leveraging technology and data to offer consumers lower prices, transparency, and fairness,” DST Global managing partner Tom Stafford said in a statement. “We are delighted to support Alex and the team at Root as they continue to build a technology company within the insurance industry.”

First, if Root or other telematics-only carriers take market share away from traditional insurers, it affects volume to those direct repair programs. It’s unclear if Root even has a DRP; a January blog post is refreshingly open to the idea of a customer shopping around for a repairer based on quality, which it calls “equally important” as price.

“While searching, don’t be persuaded by price alone,” Root’s blog states. “Yes, price matters, but so do other qualities like honesty, competency, time to repair, response to mistakes, location and proximity to you, hours of operation, warranties, and how well they communicate in laymen’s terms to customers.”

On the other hand, better drivers might switch over to telematics-powered carriers and provide those insurers with lower frequency than the industry average. This skew could mean a traditional insurer would still offer a DRP shop better odds of the partnership resulting in crash volume.

Third, an app like this able to monitor the vehicle’s motion makes it easy for an insurer to adopt electronic first notice of loss, detecting a crash and immediately starting to handle the claim.

“Root does not currently offer collision detection through our app,” Root spokesman Tom Kuhn wrote in an email Wednesday. “We will keep you informed if that changes.”

Such EFNOL capability could offer an insurer the ability to immediately recommend direct repair program shops to the consumer.

All three considerations apply whether a usage-based insurer collects data through a smartphone, dongle or bluetooth sensor or the vehicle itself. But the convenience of having it all contained in a phone might favor companies like Root over competing usage-based insurers.

Meanwhile, GEICO also has begun a variation on Root’s theme with what Insurance Journal in August reported was a six-month trial of its smartphone app DriveEasy. GEICO said the program has evolved and been renamed since what had been the “GEICO Drive” pilot started in June.

That program doesn’t appear to adjust one’s insurance premiums based on a driving score; rather, it appears focused on altering driver behavior and fostering better habits.

“When you are enrolled, DriveEasy tracks your real driving habits and provides you with an individualized score and driving tips,” GEICO’s DriveEasy webpage states. “These can be used to help you become a better driver.”

A graphic indicates that distracted driving and miles driven are given greater weight when calculating one’s driving score. Time of day and hard braking — defined as a deceleration of at least 7 mph per second — also matter.

Distracted driving is scored based on handheld phone calls and using the phone. (The DriveEasy webpage says “holding it, tapping” count as usage, but the screen being on or the phone holstered in a mount don’t.)

GEICO’s DriveEasy’s FAQ states that the data from DriveEasy testers “will not be used for rating purposes, and will not affect your insurance rate.” However, it might be used in the aggregate.

The company’s terms of use let it “use information collected from the DRIVEEASY APP to improve the prices we charge for insurance and improve the models we use to underwrite policies. In addition, from time to time, information collected from the DRIVEEASY APP may be provided to state insurance departments, on an aggregate and anonymized basis, to support GEICO’s rates and filed underwriting guidelines.” (Emphasis GEICO’s.)

It’s unclear if GEICO is using DriveEasy for EFNOL purposes.

Both parties also note that they might have to share information with third-party entities when required by law. Root, however, informs users it might share information at its discretion with business partners — including “Repair shops and recommended claims vendors.”

A screenshot from the Root Insurance app. (Provided by Root)

A screenshot from the Root app discusses the test drive the insurer uses to help set rates. (Provided by Root)