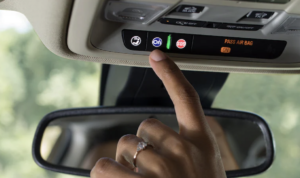 General Motors is adding a telematics-based option to its OnStar Insurance that will offer policyholders in some states the choice of allowing their driving habits to be used in setting their premiums.

OnStar has asked for regulatory approval of the new algorithm-based insurance plan in Arizona, Illinois and Michigan, and hopes to receive approval by the end of March, Andrew Rose, president of OnStar Insurance and GM’s vice president of Global Innovation, told Reuters.

“We hope to follow that with a dozen, two dozen and hopefully more states,” Rose said.

If regulators approve, OnStar would join Tesla Insurance in offering telematics-based programs in Arizona and Illinois. Tesla Insurance, launched in Texas late last year, is also now offered in Ohio, according to the insurer’s website.

In an announcement, Rose said that the new offering “means that with their consent, customers have the potential to save on insurance premiums based on safe driving behaviors, such as seat belt usage and stop and go scenarios. This new program is a first step in OnStar Insurance’s journey to bring more personalized insurance pricing to its customers.”

“As with all GM connected vehicle services, our customers will have control of their data usage and OnStar Insurance will always secure customer opt-in consent prior to using their data,” Rose said.

The program, part of an ongoing collaboration with an affiliate of American Family, will use “GM vehicle data,” the automaker said.

Contacted by Repairer Driven News, GM declined to say which driver behaviors would be monitored, or what standards OnStar will use to determine whether behavior is “safe.” More details were promised when the program rolls out this year.

The issue of transparency has been raised by Consumer Reports and other consumer advocacy groups. CR’s findings in a deep dive into telematics programs last fall led it and the Consumer Federation of America to call on the 10 insurers to make their programs more “transparent and accountable.”

The organizations’ letter asks insurers to be more forthcoming about the data they collect from telematics customers, the factors they use to rate their driving, and the reasons each of those factors is relevant.

In his announcement, Rose said OnStar is “working to deeply integrate insurance in the vehicle ownership lifecycle, making it a more seamless process in the future.” That includes accident assistance and claims handling, he said.

He added that OnStar “plan[s] to begin offering an integrated insurance product with the launch of the 2023 Cadillac LYRIQ later this year.”

In the interview with Reuters, Rose said that driver-monitoring data from GM’s upcoming Super Cruise system could be used in setting rates in later versions of the insurance plan. Super Cruise, which uses cameras, lidar and radar to enable hands-off driving, monitors the driver’s eye and head movements to make certain their eyes remain on the road.

The Insurance Institute for Highway Safety last week announced that it is developing a new ratings program to evaluate these driver-monitoring safeguards, and expects to issue its first set of ratings in 2022.

Introduced in 2020, OnStar Insurance is now available in 47 states, with plans to expand to the remaining states “in just a few months,” Rose said. Vehicles without OnStar are eligible for coverage, but will not qualify for all discounts, OnStar said.

UPDATE: GM’s OnStar Insurance to be in all 50 states early next year

“After one year of growth, OnStar Insurance plans to shift to a data-driven auto insurance model,” GM, Jan. 19

Featured image: An OnStar button in a GM vehicle. (Provided by GM)