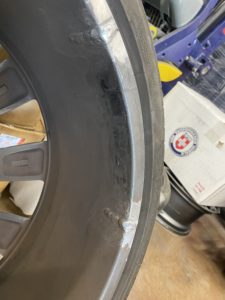 The recent discovery of a reconditioned wheel on a Tesla that came into a collision repair shop in California serves as a reminder to repairers, and perhaps new information entirely for vehicle owners, that most OEMs don’t recommend repairing rims.

Wheel reconditioning, also known as remanufacturing, is the welding, bending hammering, straightening, re-machining, reforming, reshaping, or adding of new material to wheels damaged in a collision.

Tesla’s position statement says, “The only type of wheel repair recommended by Tesla Motors is cosmetic refinishing. Tesla does not approve the use of “reconditioned” wheels or chrome plated original equipment wheels. Tesla does not endorse the following wheel repairs: welding, straightening, heating, machining, and chrome plating.”

All 25 OEMs that have reconditioned wheels position statements listed on OEM1Stop that can be viewed without a subscription are either against the practice altogether or, with most, recommend against anything above minor cosmetic damage that would warrant sanding, polishing, or refinishing. Several mention that the failure of reconditioned wheels could result in the driver losing control leading to injury or death.

Kye Yeung, owner of European Motor Car Works – where the Tesla in question was brought in – said the job was for collision repairs to the right side of the vehicle but it was noticed that the tires were bald and under state law, shops are required to let customers know about hazardous conditions of parts on their vehicles. After the owner was notified, she authorized putting a new set of tires on.

“When we went to take the tires off the old rims, our tech noticed that the wheels on the left side of the car not only has one been welded but the other one is out of round,” Yeung said. “We asked the owner if she was aware that this was an issue and had the car been repaired before.” 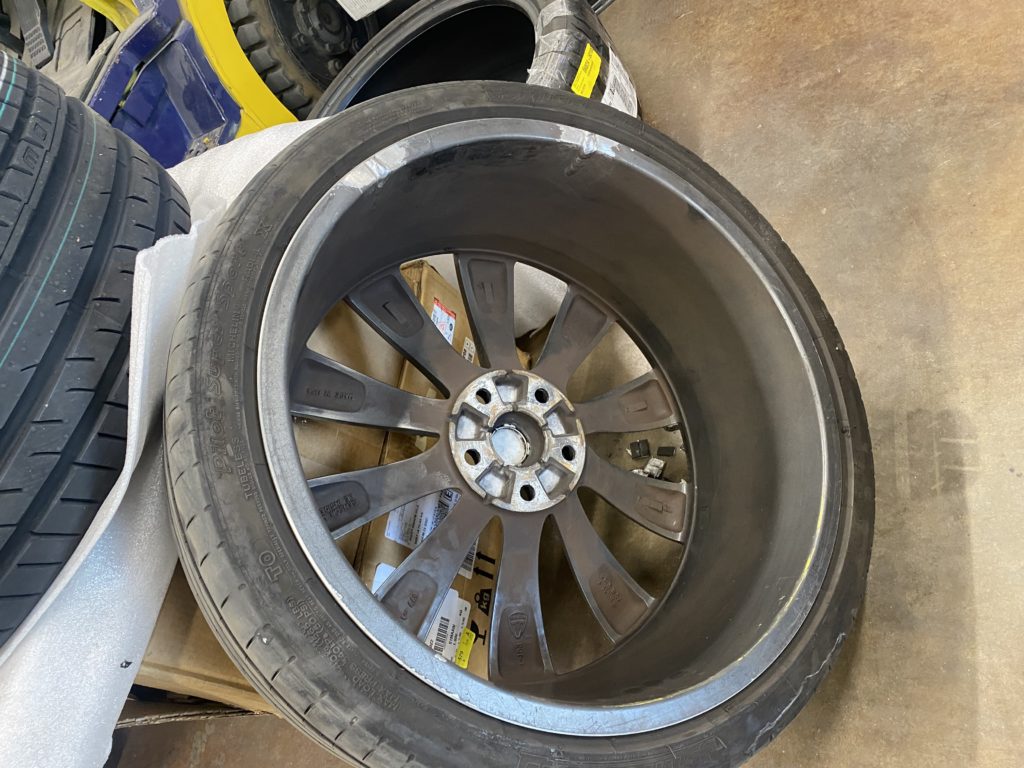 The owner confirmed that there had been repairs to the left side of the vehicle, including the rims.

“The problem we had, obviously, is we couldn’t put these brand new tires on bad rims for the same analogy that we knew that there’s something wrong and we can’t jeopardize the customer,” Yeung said.

This instance is a “worst-case example” and posed a major safety issue – the rim could’ve cracked from the weld failing, which would’ve caused the tire to deflate, he added.

“The problem with alloy rims is the fact that you bang something with it, even though it might be scraped on the outside, it could suffer some kind of internal damage to the actual alloy that you can’t see unless you strip all the paint off of it and then you have a process like a Magnaflux, which they put a dye in to see if there’s any cracking.

“…The problem we have is some manufacturers don’t have any position statements so you, as the customer, could come in and the rim could have a big chunk of aluminum missing out of it and the repair facility because they don’t have anything to back them up, they send these rims out to be remanufactured or reconditioned.”

That brings this story to another point, it doesn’t matter if the reconditioning is done by a sublet vendor or if it was on the car when it came in for repairs. If the shop authorizes the work or puts the rims back on, they’re liable. Like Intrepid Direct Insurance Sales Director Alex Whittit told Repairer Driven News, the liability always falls on the shop that the customer brought their vehicle to. That goes for if an auto insurance carrier is pushing against new replacements, too.

“The argument of, ‘Well they told me to do that’ [doesn’t work],” Whittit said. “‘Yeah, but you’re the expert.’ The buck’s always going to stop with the expert performing the work. …The repairer’s always got to do what’s best and right for them regardless of what that customer’s insurance company is saying.”

Yeung noted that the rim should’ve been thrown in the trash. The vehicle owner didn’t share previous repair information with Yeung so he doesn’t know the details of it, including whether an insurance carrier recommended the reconditioned wheels, but he said that is an issue in the collision repair industry.

“Our industry’s subjected to a third-party payer the majority of the time and the third-party payer always wants to save the most money as possible,” he said. “…If you’re a direct repair [program] for an insurance company and they dictate that you remanufacture every rim, the shop owner sends things out even though there’s a position statement stating that you can’t because they want to stay on the program. …I’m just amazed that shops would go to that trouble to have something like that repaired and inherit the liability. …If it ever goes to court, the insurance company goes, ‘Hey, we only made that recommendation. We didn’t tell them they had to do it.'”

Whittit said a “huge protection” against liability would be to inform the owner that the OEM warns against using reconditioned wheels, even if the customer still decides against putting new ones on.

“If they’re [repairer] going against what the OEM is recommending for a repair procedure, it’s going to open them up to liability because, in a lawsuit, an attorney’s going to be able to point that out; particularly if they’re OE-certified in that particular brand,” Whittit said. “An extreme example is always the John Eagle case where they glued the roof instead of welding it and the reason that lawsuit got so big is because they were able to prove that John Eagle [Collision Center] knowingly didn’t follow repair procedures.”

However, he added that no lawsuit that could be similar to the Eagle case is “completely black and white” and each depends on a “myriad of factors,” like what state the shop is in and if the customer asked for reconditioned wheels or the shop used them without the customer knowing.

Again, there are many factors that would come into play, including the carrier and how the policy is worded, but it would likely be very difficult for a business insurance carrier to deny coverage of a shop that’s found liable for a crash caused by their use of reconditioned wheels unless an exclusion is “spelled out plainly” in the policy, Whittit said.

Featured image: A closeup shot of a reconditioned wheel that was taken off of a Tesla at European Motor Car Works in California is shown. (Photo provided by Kye Yeung)

Another angle of a reconditioned wheel taken off of a Tesla in California is shown. (Photo provided by Kye Yeung)

‘Repair U’, OEMs: Only cosmetic work permitted on wheels — and even that might have restrictions