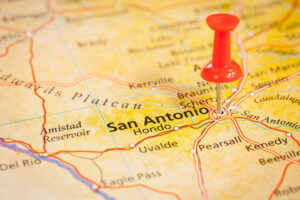 Tesla is building a $6.5 million collision repair center in San Antonio, Texas, according to documents filed with state regulators.

The 40,200-square-foot shop would be the third Tesla Collision Center in the OEM’s home state of Texas, and the 13th in the U.S. Construction is expected to start in July and be completed in April 2023, according to a filing with the Texas Department of Licensing and Regulation.

According to its website, Tesla currently operates collision centers in Houston and Dallas. The new center will be 80 miles northwest of Austin, the site of Tesla’s new 1.9 million-square-foot Gigafactory.

It’s not clear what financial impact the new center will have on nearby body shops that have invested time and money to be accepted into the OEM’s approved repair network. According to Tesla’s online shop finder, there are six approved shops located between seven and 80 miles from the new location.

Tesla had not responded to questions from Repairer Driven News as of Wednesday evening.

Burl Richards, president of the Auto Body Association of Texas (ABAT), said his shop, Burl’s Collision, is about five hours from San Antonio, “so it will not have an effect on my business. With that being said, I do believe that it will have an effect on shops within say a 60 mile radius, maybe more.”

He said he’s not aware of any instances when Tesla has informed a network shop of its plans to open an in-house center near them. “I have spoken with a couple of shops in larger markets that have had corporate body shops move in on them and they were never officially notified,” Richards said.

As of Wednesday, Tesla listed 12 collision centers in the U.S., with three in California, two in Texas, and one each in Arizona, Colorado, Florida, Illinois, Maryland, Nevada, and Washington. Tesla also listed one overseas collision repair center, in London.

The company says that its body shops can “perform full structural repair in addition to light collision work.” These are in addition to the third-party shops in Tesla’s approved repair network.

The OEM also says that its Tesla Service Centers are capable of performing “cosmetic repairs on parts including bumpers, trunks, side mirrors, wheels and glass.”

The website directs customers to sign in to the Tesla app and select “Collision & Glass Repair” to make an appointment. “Depending on the severity of the damage, you may be referred to an alternate location,” it advises.

The network of in-house collision repair centers has grown by at least four over the past 14 months. In February 2021, Tesla’s website indicated its network had grown to nine locations, with new centers in California, Arizona, Colorado, Maryland, and Nevada. Just two months earlier, Tesla had reported just four locations in three states – two in California, and one each in Illinois and Maryland.

Tesla CEO Elon Musk made it known in 2018 that he intended to take more repair work in-house.

Musk tweeted that the collision repair industry’s lack of specialization was to blame for delays in getting cars back to customers.

“Outside repair shops are jack of all trades, which means supporting 1000’s of makes & models,” Musk tweeted. “Tesla collision repair specializes in three. Having all parts in stock & not waiting for insurance approval also make a world of difference.”

Musk didn’t elaborate on why an in-house Tesla shop wouldn’t also have to wait for insurance approval, though this could be accomplished through a variety of strategies that are available to the industry as a whole. Direct repair programs can allow the shop to get started immediately, or the shops can simply bill customers and let them seek reimbursement from a carrier. Tesla began offering its own insurance in 2020.

Other Twitter users on the thread complained that the fault for the delays lay with Tesla’s own parts shortage. One expressed fear that Tesla would service its own shops at the expense of third parties.

In a May 2018 quarterly earnings report to shareholders, Tesla said that its own body shops constituted a source of “substantial revenue generating opportunities.”

“We expect Service and Other losses to reduce substantially in the coming quarters as our service infrastructure becomes significantly more utilized with the ramp of our Model 3 fleet size,” Tesla wrote. “There are also substantial revenue generating opportunities as we open our own body shops in 2018 to improve costs of out-of-warranty repairs and as we increase our offering of accessories and merchandise.”

Tesla: Company-owned body shops to open this year, could be revenue center