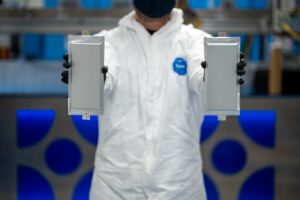 Solid-state battery developer Solid Power announced Monday that it has finished installing a pilot production line at its factory in Louisville, Colorado, and is on target to begin supplying battery cells to partners Ford and BMW by the end of 2022.

“The installation of this EV cell pilot line will allow us to produce EV-scale cells suitable for initiating the formal automotive qualification process,” Doug Campbell, chief executive officer of Solid Power, said in a statement. ” Over the coming quarters, we will work to bring the EV cell pilot line up to its full operational capability and look forward to delivering EV-scale all-solid-state cells to our partners later this year.”

The company said it expects to be able to produce 300 cells a week, or 15,000 cells a year, once its plant is running at full capacity. It said its large-format, sulfide-based cells will be built with methods similar to those used for lithium-ion batteries.

“With the EV cell pilot line now installed, our next big challenge is commencing production at scale and building cells that meet the requirements necessary for us to enter into automotive qualification later this year,” said Derek Johnson, chief operating officer at Solid Power. 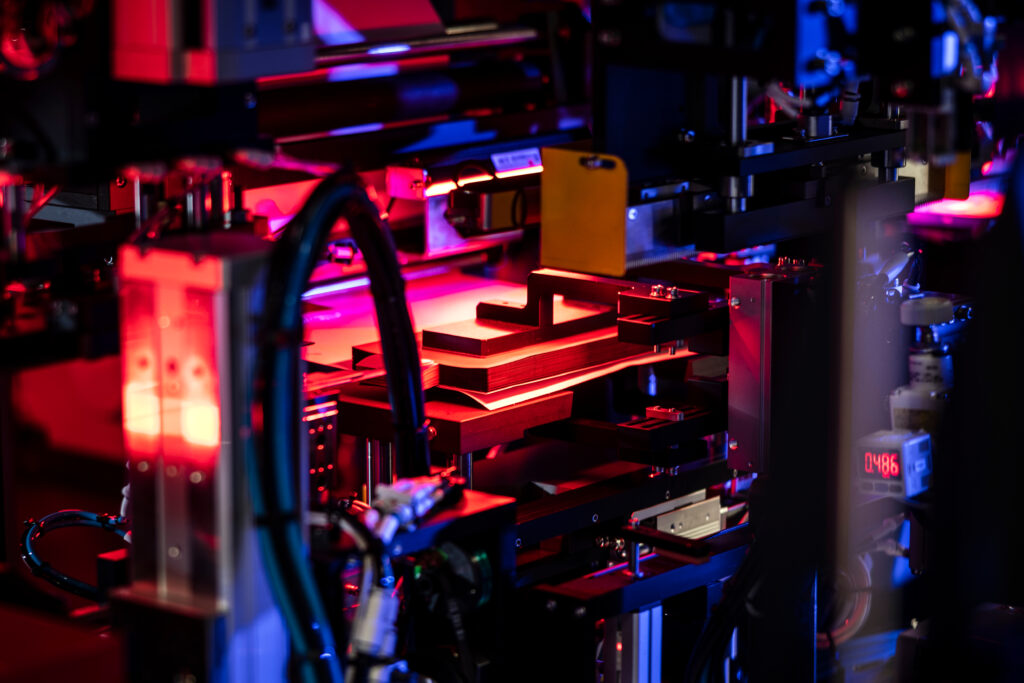 A number of OEMs have shown interest in solid-state batteries, which do without the liquid electrolyte found in conventional lithium-ion batteries. Proponents say solid-state batteries can be lighter, with greater energy density, and provide more range at lower cost. They’re considered less prone to overheating, something that has dogged lithium-ion technology, and less likely to cause a fire if the battery pack is punctured or damaged in a crash.

Solid Power said its Silicon EV Cells are designed to power longer-range, lower-cost, and safer electric vehicles. “By using over 50% active silicon in the anode, Solid Power has designed the cell for increased energy density, which is expected to correlate to longer driving ranges to address range anxiety – a key barrier to mass EV adoption,” the company said.

“Solid-state battery technology is important to the future of electric vehicles, and that’s why we’re investing in it directly as well as accelerating Ford’s in-house R&D on next-generation battery technology,” said Hau Thai-Tang, Ford’s chief product platform and operations officer, in March 2021.

“Leveraging the speed of a startup and the expertise of some of the most seasoned battery experts in the world at Ford, we’re exploring different ways to power tomorrow’s fun-to-drive all-electric vehicles, using proven development and manufacturing processes,” Thai-Tang said.

In addition to Ford and BMW, Solid Power said it will have the ability to meet other OEM’s specifications, with cells optimized for capacities ranging from 60 to 100 ampere-hours (Ah).

A growing number of OEMs have announced investments in solid-state battery technology. In April, Nissan unveiled a prototype production facility for laminated, all-solid-state vehicle batteries, saying it intended to launch an EV powered by in-house solid-state batteries by 2028 as part of its long-term vision, called Nissan Ambition 2030.

Nissan’s announcement came days after Honda said it would be accelerating its development of solid-state batteries as part of its $39 billion investment in electrification and software technologies over the coming decade. Honda said it expects its demonstration production line expected to be in operation by the spring of 2024 and plans to use the new batteries in production vehicles in the second half of the 2020s.

In November 2021, Mercedes-Benz announced that it had made “a high double-digit million dollar” investment in solid-state battery developer Factorial to jointly develop next-generation battery technology. It said its goal was to begin testing prototype battery cells as early as 2022.

“By accelerating our Mercedes-Benz strategy towards ‘Electric Only’, we have set the course for a fully electric future. We will also play a leading role in the field of battery technology. With Factorial as our new partner, we are taking research and development in the field of promising solid-state batteries to the next level,” said Markus Schäfer, chief operating officer of Mercedes-Benz Cars.

The Ford Ion Park team also is exploring better integration and innovation opportunities across all aspects of the value chain – from mines to recycling – working with all teams within Ford, including experts at Ford’s new Battery Benchmarking and Test Laboratory, Ford Customer Service Division, plus key suppliers and partners.

The Ford Ion Park team already is underway. In addition, a $185 million collaborative learning lab in Southeast Michigan that is dedicated to developing, testing and building vehicle battery cells and cell arrays opens late next year.

This world-class 200,000 sq.-ft. learning lab will include pilot-scale equipment for electrode, cell and array design and manufacturing and will use state-of-the-art technology to pilot new manufacturing techniques that will allow Ford to quickly scale breakthrough battery cell designs with novel materials once the company vertically integrates battery cells and batteries.

Committed to leading the EV revolution

Ford is committed to leading the electric vehicle revolution and this year has gained significant momentum on its plans.

In North America, the Ford Mustang Mach-E has found early sales success. Plus, the all-electric Ford Transit is set to go on sale late this year and the all-electric F-150 arrives by mid-2022. Ford will be the first automaker in the U.S. to offer commercial customers fully electric van and full-size pickup choices.

In Europe, Ford is moving to an all-electric lineup by 2030, with its commercial vehicle range 100 percent zero-emissions capable, all-electric or plug-in hybrid by 2024. Ford also is investing $1 billion in a new electric vehicle manufacturing center in Cologne to build a high-volume all-electric passenger vehicle for European customers starting in 2023.

In China, Ford is preparing to produce the Mustang Mach-E for local customers later this year, and recently announced it is establishing a BEV division with a direct sales model and network that will reach 20 major cities across China this year. In addition, Ford has partnered with China’s State Grid and NIO to offer EV customers access to more than 300,000 public charging stations, of which 160,000 are fast-charging, in more than 340 cities across the country.

Ford has been actively involved in battery research and electric vehicles dating back to the days of Henry Ford and Thomas Edison. To date, the company has secured more than 2,500 U.S. patents in electrification technologies, with another 4,300 patents pending and has sold more than 1 million hybrids, plug-in hybrids and all-electric vehicles since 2004.