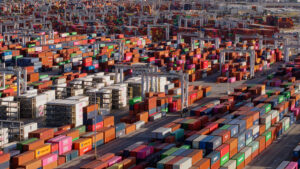 Ducker Worldwide states in its June 15 whitepaper that the automotive supply chain is slowly recovering from the effects of the COVID-19 pandemic but “uncertainties remain” due to new geopolitical events within the last 18 months, specifically the Russia-Ukraine War.

“Rising material prices are hitting supplies, while logistics costs remain high, and the availability of major components such as semiconductors remains far below requirements,” Ducker says. “Moreover, the acceleration of electrification adds a layer of difficulty.”

The war plays a role in shortages because Russia supplies 45% of the world’s palladium that’s used in catalytic converters and 9% of high-grade nickel, which is critical for lithium-ion batteries. And Ukraine is a major supplier of wire harnesses, especially for European OEMs including Volkswagen and BMW. The war is also driving up the prices of lithium and aluminum.

In China, recent pandemic lockdowns have served to slow down raw material processing and component deliveries because of factory shutdowns, limited factory capacity due to supply shortages, and delivery driver quarantines.

“COVID-19 disruptions in China have ripple effects that touch every corner of the global economy,” Ducker wrote. “A significant side effect lies with the substantial backlog of container ships at Chinese ports affecting the global supply chain. Over 500 ships await docking at Chinese ports, making up around a third of the global backlog.”

On the other side of the globe, here in the U.S., the passage of the federal Ocean Shipping Reform Act could help ease logistic tensions at ports sometime soon with its promise to “crack down on skyrocketing international ocean shipping costs and ease supply chain backlogs that are raising prices for consumers and making it harder for U.S. farmers and exporters to get their goods to the global market,” according to a Senate news release.

The law will make it possible for the Federal Maritime Commission (FMC) to “eliminate unfair charges, prevent unreasonable denial of American exports, and crack down on other unfair practices harming American businesses and consumers.” It also grants the FMC temporary emergency authority to collect data and public comment during times of emergency congestion.

As others have predicted, Ducker also believes the chip shortage won’t be solved this year due to chip plant closures and surging consumer demand that likely won’t improve until new plants reach full capacity by mid-2023. Automakers have approached the issue by saving chips for higher-end vehicles and canceling some features altogether.

“As economic conditions remain, we expect higher vehicle production in 2024 and 2025 to cope with demand and replace lost volumes,” Ducker wrote. “Consumers will look forward to returning models whose life cycle has been stretched by a few years and which have contributed to the increased age of the fleet.”

In a report released June 9, McKinsey & Co. suggests automotive Tier 1 suppliers, and in some cases, OEMs, take a different approach to the chip shortage. One way to do so is by developing strong technology roadmaps of demand and supply for chips throughout the full value chain including planning ahead for the potential use of “drop-in components” in place of the usual ones. Another way is to consider re-engineering needs for chips that might come up. For the long-term, McKinsey recommends demand planning be extended by three to five years.

“Although the chip shortage is affecting many industries, the automotive sector has some unique characteristics that exacerbate the problem,” McKinsey wrote. “For instance, many OEMs and Tier 1 suppliers follow a ‘just in time’ manufacturing strategy in which they order semiconductors and other vehicle components close to production to optimize inventory costs. When vehicle sales fell in early 2020, OEMs and Tier 1 suppliers decreased their chip orders, leaving them low on inventory when demand began to recover. Companies in industries that do not follow a just-in-time ordering approach were in a better position, especially since some had secured extra capacity when automotive players canceled or reduced their orders.”

A factor of success will be whether or not OEMs and Tier 1 suppliers invest in data-driven processes and automated tools to “improve the quality of their end-to-end planning process,” the report states.

“OEMs and Tier 1 suppliers have quickly moved into firefighting mode to deal with the short-term chip shortage, but even more decisive action is necessary, especially since the situation is likely to persist far into 2023. Taking a hard look at internal processes, contract conventions, and product features will go a long way, as will greater transparency and cooperation with semiconductor suppliers. Those OEMs and Tier 1 suppliers that are willing to experiment and investigate creative solutions may gain the greatest advantages.”

CCC Intelligent Solutions also reported on May 31 in a midyear update of its 2022 Crash Course report that supply chain issues worsened because of Russia’s invasion of Ukraine, and inflation has continued to drive up repair prices.