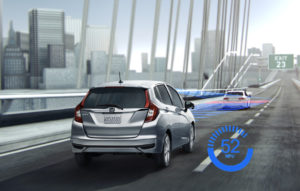 “In addition, these driver assistive systems often will not display DTCs during a vehicle scan unless there is damage to the applicable system, so aiming and/or calibration may be required,” Honda wrote in the May 2019 statement. “Refer to the published procedures on aiming and calibration in the appropriate service information available on ServiceExpress by searching the keyword Aiming.” (Emphasis Honda’s.)

Essentially, you’ve got to read the OEM repair procedures to know what’s necessary for the systems, not assume “No codes = ADAS fine.” You can get an entire year’s subscription for less than $1 a day here.

About 69 percent of all Hondas and Acuras produced in the year ending Aug. 31, 2018, had at least one important ADAS capability — autobraking — installed as standard or as an option, according to the IIHS and NHTSA. About 59 percent of the entire Honda and Acura 2019 model year fleet already offered it standard, according to Consumer Reports.

Other ADAS likely exists as well; Honda tends to install multiple systems in a single Honda Sensing or AcuraWatch package.

The OEM’s May 2019 position statement replaces a prior version released in October 2017.

Honda’s revision this month also stresses the need to use its i-HDS scan software on Hondas and Acuras rather than a third-party scan tool or service.

The old version called the i-HDS the “recommended way to accurately determine the post-collision status of all Honda and Acura vehicle electronic control systems.” (Emphasis Honda’s.) It also said the OEM “does not test other scan tools and cannot comment on their capabilities or accuracy.”

“American Honda’s position is that the only way to accurately determine the post-collision status of all Honda and Acura vehicle electronic control systems is with the factory-authorized diagnostic software, i-HDS,” Honda wrote in the May 2019 position statement. (Emphasis Honda’s.) “… American Honda does not test other scan tools or remote diagnostic services and cannot comment on their capabilities or accuracy.”

Honda in January 2018 had said it was OK with its ProFirst shops using the asTech remote diagnostics device and J-2534 devices like the AirPro, for both were still running the i-HDS software.

“For Pro-First Certified shops we will still accept AsTech and AirPro as both of these companies are running HDS/i-HDS software as required for ProFirst,” he wrote.

“HDS/i-HDS software can be purchased and run on any laptop that meets minimum system requirements.

Any J2534 connection device should theoretically work with the HDS/i-HDS software but the only one validated by Honda Motor or American Honda is the Denso DST-I.”

“The i-HDS software requires the use of a Honda/Acura-specific, J2534-compliant vehicle communications interface (VCI) device between the vehicle and your computer, which must be purchased separately,” Honda wrote in the May 2019 statement. “The Denso DST-i is the only factory-approved VCI device for diagnostics and reprogramming.”

This is stricter than Honda’s October 2017 statement, in which the OEM wrote. “The i-HDS software requires the use of a Bosch MVCI or Denso DST-i vehicle communications interface (VCI) device between the vehicle and your computer, which must be purchased separately.”