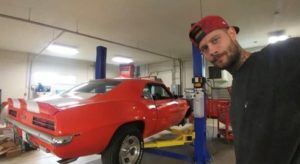 The Collision Industry Foundation (CIF) has launched a fundraising campaign to help an Ohio-based technician and painter who is recovering from an in-shop accident that burned over 70% of his body.

Bryan Miller was working on a motorcycle in September at Elite Auto Body, Cycle and Sales in Bethel, Ohio when it backfired and triggered a chain reaction that resulted in the shop going up in flames, according to a CIF press release. Trapped inside his work area for several minutes, he caught on fire before making it out through a window.

“The only way I could keep myself from passing out was to scream,” Miller said.

A man and woman on a motorcycle soon spotted him and stopped to help. Miller recalled that it took 30 minutes for medical personnel to arrive and another 30 minutes for a helicopter to get there to transport him to the hospital.

Most of the burns that covered his body were third-degree burns and while in the hospital, he endured a near-fatal case of pneumonia. Six months later, after multiple surgeries and skin grafts, Miller lives in constant pain that he describes as “background noise that’s normal.”

“I have to wake up and basically stretch myself back to some kind of normal mobility. I get tight again every night; it’s like wearing a shirt that’s too small for you.

The CIF, a nonprofit organization that helps people with ties to the collision industry after disasters, heard about Miller’s accident and is working to raise money to help him. CIF has worked for several years to help victims, most recently with a COVID-19 aid effort that raised more than $275,000 to those in the auto body industry that were financially impacted by the pandemic as well as fundraisers for the children of a couple killed in the August 2019 mass shooting at a Walmart in El Paso, Texas and those in the industry who lost their homes and/or businesses in the 2018 Camp Fire in Northern California. The CIF has also aided many victims of natural disasters including hurricanes Katrina, Michael, Florence, Harvey, and Laura.

At the January Collision Industry Conference (CIC) meeting in Phoenix, more than 150 industry leaders in attendance gave a virtual shout-out to Miller to show him their support. Tax-deductible donations can be made to him through CIF at collisionindustryfoundation.org/donate under “general donation.” Be sure to specify the donation is for Miller.

After leaving the hospital, Miller received constant care from his fiancée, Kassi Nellett, who spent five hours a day changing his dressings. An infection in his wounds prompted a stay at the Daniel Drake Center for Post-Acute Care in Cincinnati, where he still resides. Shortly after the holidays, he contracted COVID-19, and now that he’s recovered from that hopes to move in with his father in the next few weeks. Miller expects it will take at least another year for him to regain full mobility.

Originally a mover, Miller began his auto industry career in 2016 when a friend asked if he’d be interested in picking up some side work at a high-end restoration shop. A self-described “artist at heart” who had tried his hand at tattooing prior to working at the shop, he instantly fell in love with the artistry of pinstriping and painting cars.

“I found that everything came quite naturally to me – from simple bodywork all the way to framework and painting,” Miller said.

After further developing his skills as a combination collision technician/painter at two other facilities, he moved on to his most recent job at Elite.

“I love doing what I do for a living and could not imagine doing anything else. It is the most satisfying thing in the world when someone brings in something broken so I can transform it into something beautiful. And to me, ‘painter’ is a prestigious title.”

He hopes to someday return to the profession he loves.

“I want to go back to work right now. It’s my passion; I feel blessed to have found a career that’s given me a sense of pride to be able to tell people what I do for a living. I just love everything about my job.”

Michael Quinn, CIF board president and president of AirPro Diagnostics, urges his collision industry peers to support Miller in his recovery and hopeful return to the automotive world.

“Bryan’s incredible story is one of survival and fighting back. We as an industry have an obligation to help our own, and we ask you to dig deep to aid CIF in helping Bryan and his fiancée to start again. This is not a one-time donation or effort; CIF is committed to following Bryan through rehab and getting him the training and tooling necessary to work his way back to a shop. On a recent call with CIF, Bryan called us his new best friends. We are honored to know him, and we are committed to helping him rebuild his career in this industry.”

“CIF’s core value is to help people in need. I don’t think there’s anything that better defines our mission than Bryan’s story. His spirits are high, and he really has a desire to get back into the industry. We don’t want to lose someone like him. There are so many things he can do within the automotive field. We would like to raise as much money as we can for him, so we’re calling on everyone in the industry to help this young man rebuild his life.”

Miller’s many needs include, but aren’t limited to, funds to aid him in securing permanent housing, tools to replace the ones he lost in the fire, and education/direction in regard to new professional opportunities such as estimating, parts, et cetera that could accommodate his physical condition as he works toward his desire to return to painting and bodywork.

“Before the folks at CIF had reached out to me, I was very depressed and had no idea how I would move forward,” Miller said. “Jim and Mike encouraged me to keep fighting and to know that I had some unrealized purpose. It was like a storybook getting connected with these guys. And the video shout-out from CIC in January really helped motivate me and to know my industry cares.

“I would really like to thank everyone who is and will be involved in making all these amazing things happen for me in such a dark time. It is truly a blessing, and I don’t know if I would even be able to get back in the industry without your assistance.”

For more information, call 855-4CIF-AID or 804-427-6982. To apply for assistance, visit collisionindustryfoundation.org/disaster-assistance-request-form.html.

Featured image: Bryan Miller poses for a photo prior to his September shop accident. (Photo provided by CIF)

Bryan Miller continues to recover from a shop accident that burned 70% of his body. (Photo provided by CIF)