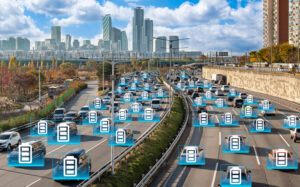 By the end of the decade, just over half of all new passenger vehicles sold will be electric vehicles (EVs), according to a report by Bloomberg New Energy Finance (NEF), the strategic research affiliate of Bloomberg News.

The report found that adoption of EVs is accelerating, thanks in part to the $7,500 EV point-of-sale tax credit included in the federal Inflation Reduction Act (IRA), Bloomberg News said. President Biden has set a goal of the end of the decade for half of all car sales in the US to be battery-electric, plug-in hybrid electric, or hydrogen fuel cell-powered.

BloombergNEF had previously predicted that EV sales by 2030 would be about 43% of the total U.S. market, but raised that figure to 52% after the enactment of the IRA.

EVs accounted for less than 5% of all vehicle sales in the U.S. in 2021, well below the global average of 9%, Bloomberg said. In some countries, the adoption rate is much higher — plug-in EVs account for 24% of all new car sales in China, and more than half in Norway. BloombergNEF’s revised forecast calls for the U.S. surpassing the global average in 2026, two years earlier than it had previously predicted.

“In the next year or so, there shouldn’t be too much of a difference [in sales],”  BloombergNEF electric car analyst Corey Cantor told Bloomberg News. “Later in the decade, we expect not only the EV tax credit but the battery production tax credit to drive a steeper decline in EV costs.”

In its seventh annual Electric Vehicle Outlook (EVO) 2022 report, issued June 1, BloombergNEF predicted that the market for battery raw materials will remain “very tight” in the years ahead, with a significant near-term investment in the supply chain needed to avoid a “supply crunch.”

Still, the rising cost of producing batteries should not impede EV adoption, EVO 2022 said, because the same factors that are affecting battery raw materials — the war in Ukraine, inflation, and trade frictions – are also pushing up the price of fossil fuels.

According to the Alliance for Automotive Innovation (AAI), the trade organization representing the great majority of U.S. OEMs, EVs accounted for 6.6% of new light-duty vehicle sales in the second quarter of 2022, but still represent just under 1% of all registered light-duty vehicles on U.S. roads.

AAI and others have cautioned that the addition of public charging locations has not kept pace with EV sales, and that consumers are frustrated with broken and inoperable charging stations. On Wednesday, California Gov. Gavin Newsom signed into law a bill designed to improve access to reliable EV chargers for the state’s drivers.

Starting on January 1, 2025, the Energy Commission would be required to assess the uptime of charging station infrastructure, “including, at a minimum, an assessment of equitable access to reliable charging stations in low-, moderate-, and high-income communities,” according to the legislative council’s digest of the law. The assessment would have to be updated every two years.

“If we want consumers to buy EVs, they need to know they can depend on public charging stations. Unfortunately, this is an area of needed improvement for the industry as EVs become more mainstream,” Louis Tremblay, president and CEO of FLO, a charging station network, said in a statement. “Thanks to Governor Newsom and California lawmakers, the EV Charging Reliability Transparency Act will tackle this issue head on.”

In August, J.D. Power reported that customer satisfaction with the public charging infrastructure has remained flat or fallen, as growing sales of the vehicles puts additional stress on an “already beleaguered” system.

The bipartisan Infrastructure Investment and Jobs Act that was signed into law in November 2021 includes $5 billion in funding for states to establish a nationwide EV charging network and $2.5 billion in competitive grants to deploy publicly available EV charging, hydrogen fueling, propane fueling, and natural gas fueling stations through 2026. The Biden administration announced last week that it has approved 35 EV infrastructure plans across the U.S. under the National Electric Vehicle Infrastructure (NEVI) Formula Program.