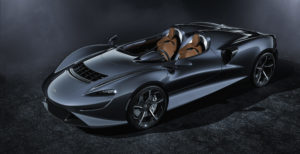 Supercars are not the bread-and-butter of the average collision repairer, but they’re notable sometimes for revealing cutting-edge technologies that someday might filter down to a luxury car, or even a mass-market one.

With that in mind, we direct repairers’ attention to the Elva, which McLaren last month said was “the lightest road car we’ve ever built” and allows passengers to travel at high speeds without a windshield.

The two-seater is a carbon-fiber monocoque that McLaren said means the “open-top roadster does not require any additional strengthening as would be the case with a vehicle built from aluminum or steel.”

The vehicle also uses a “bespoke carbon fibre chassis,” a carbon-fiber floor and carbon-fiber doors the OEM called “notably the lightest that McLaren has ever created.”

“The entire body is carbon, and McLaren has pushed the limits of the material to not only create incredible sculpted forms, but to also reduce weight,” the OEM wrote. “The front clamshell, for instance, is just 1.2mm thick and meets all of McLaren’s structural integrity targets – yet it forms an astonishing one-piece panel that wraps around the entire nose of the vehicle and provides a clean, uninterrupted vision without any panel joins. Perhaps even more impressive are the body side panels, which are each over  ten feet long and stretch from the front wheels, past the side intakes, around the rear tonneau cover and all the way until the active rear spoiler.

“Each door is constructed entirely of carbon fibre and features a single-hinge design, mounting to the vehicle just behind the front clamshell. The doors operate in a Dihedral function, a McLaren trademark. The floor within the McLaren Elva is exposed carbon fibre, once again highlighting the weight saving throughout.” 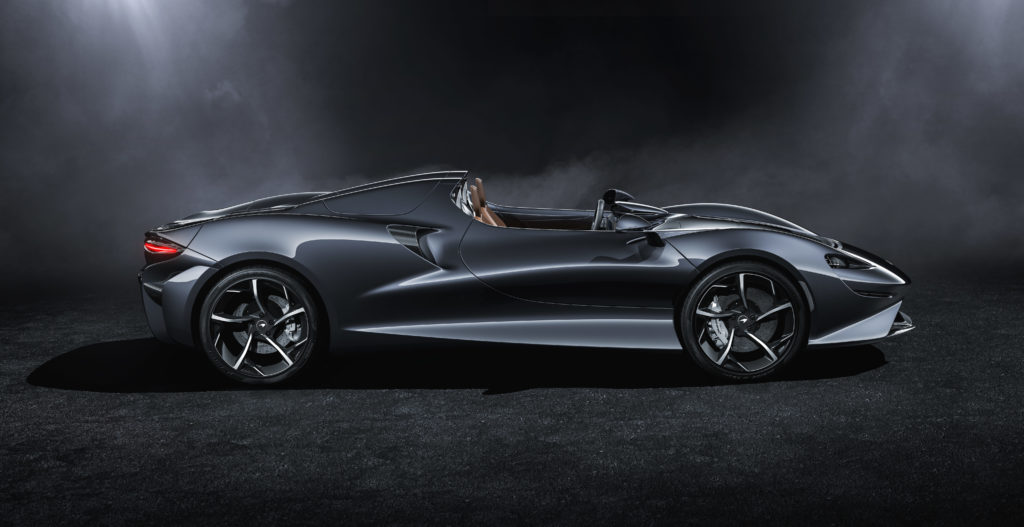 The trunk, such as it is, sits beneath the rear tonneau. “Crafted from carbon fibre, the curving single-piece panel is operated manually and secured with soft-close latches,” McLaren wrote. “Elegant and lightweight, it further reduces weight at one of the highest points of the McLaren Elva. The compartment under the tonneau has space for helmets and also houses the porthole-like panels that showcase the two visible air filters – a fine example of the McLaren design principle of exposing functional engineering.”

According to McLaren, despite lacking a roof, a windshield or A-pillars, Elva owners won’t need helmets.

“Helmets can be worn if preferred, but the form and sculpture of the upper cabin wraps around the driver and passenger to provide a secure environment,” the OEM wrote. The car also uses a “deployable roll-over protection system” to product occupants without having to make the rear buttresses too high.

You’ve probably seen such rollover systems already on mass-production cars. For example, the 2013-present Volkswagen Beetle Convertible includes “two rollover bars controlled by the airbag computer and activated “within milliseconds” of a crash being detected.

McLaren relies on other automatically deploying systems for aerodynamics, including those in what it called the “world-first” Active Air Management System making a windowless car possible. (The vehicle owner can request a windshield be added for free as a factory option.)

“The system channels air through the nose of the Elva to come out of the front clamshell at high velocity ahead of the occupants before being directed up over the cockpit to create a relative ‘bubble’ of calm,” McLaren wrote. “The system comprises a large central inlet situated above the splitter, a front clamshell outlet vent and a discreet carbon fibre deflector that raises and lowers vertically; when the AAMS is active, the deflector is deployed at the leading edge of the bonnet outlet, rising (5.9 inches) into the freestream to create a low-pressure zone at the vent.

“The vented air is directed through a 130-degree radius, using a network of transverse and longitudinally mounted carbon fibre vanes across the bonnet outlet; distributing the airflow both in front of and along the side of the cabin further assists air management in the cabin environment. At urban speeds, when the level of airflow into the cabin means the AAMS is not needed, the system is inactive. As vehicle speed increases, the AAMS automatically deploys and remains active until speed reduces, at which point the deflector retracts. The system can also be button-deactivated by the driver.” 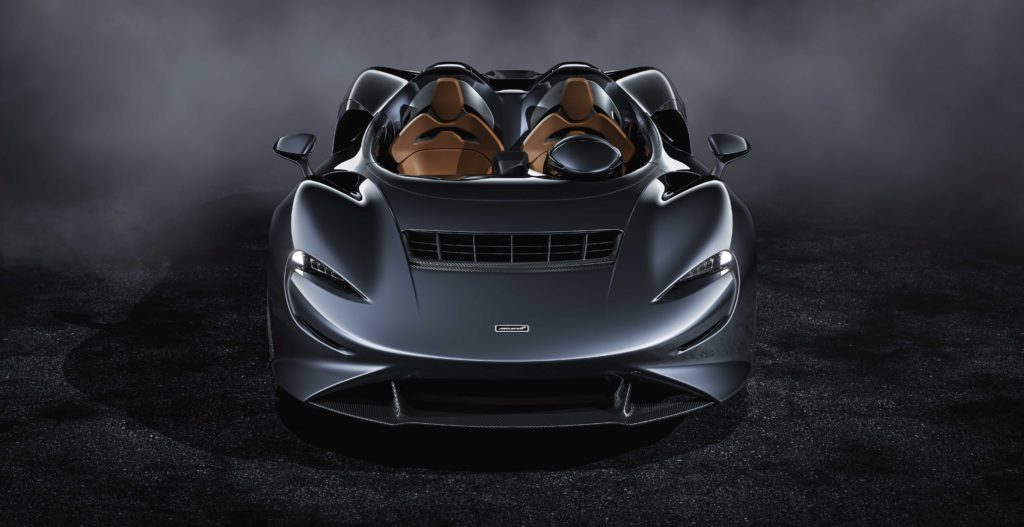 At speeds too low to warrant the “AAMS” system, the car seals off its central duct, “diverting air flow into the low-temperature radiators and increasing their cooling efficiency.” These radiators sit ahead of each front wheels, cooling the charge air temperature and that of the oil in the transmission.

The high-temperature radiators are housed in front of each rear wheel. The vehicle body is shaped to guide air to them.

“In addition to housing the AAMS, the front clamshell features deep contours that guide air into a discreet duct in the leading edge of each carbon fibre door,” McLaren wrote. “… This captured cooling air is then directed into the two rear-mounted, powertrain-cooling, high-temperature radiators (HTRs) located just ahead of the rear wheels. A second, lower duct that starts inside the front wheelarch also channels air through the bodyside to the HTRs, which are additionally fed through the visible main side intakes. Intakes on the rear of each buttress channel combustion air into exposed air filters under the tonneau, which feed the carbon fibre engine plenum.”

The Elva also has an active rear spoiler able to adjust its height and angle on the fly for optimized aerodynamics.

The underside and rear bumper area of the Elva also play a role in aerodynamics.

“The McLaren Elva has a completely flat underfloor until the point by the rear axle at which the diffuser starts and increases in height to accelerate air out from under the vehicle,” McLaren wrote. “The diffuser features vertical ‘fences’ to guide the airflow without reducing the air evacuation path and these combine with the rear bumper side extensions to further improve the aerodynamic efficiency.”

The concept of redirecting air passively and actively throughout a vehicle’s body is absolutely something repairers can see in cars today — and potentially should expect to see more of as OEMs seek to decrease emissions or improve performance through aerodynamic efficiency.

A standard air dam lowers itself 2.5 inches from the front of the 1500 whenever the truck nears 35 mph. The only exceptions will be Ram 1500s whose owners bought the air suspension option — as that aerodynamic feature drops the truck 0.6 inches, the air dam would have been scraping the ground, a spokesman explained — and the Rebel trim.

“It is the first of its kind on a high-volume production vehicle,” air dam creator Magna wrote in a news release. 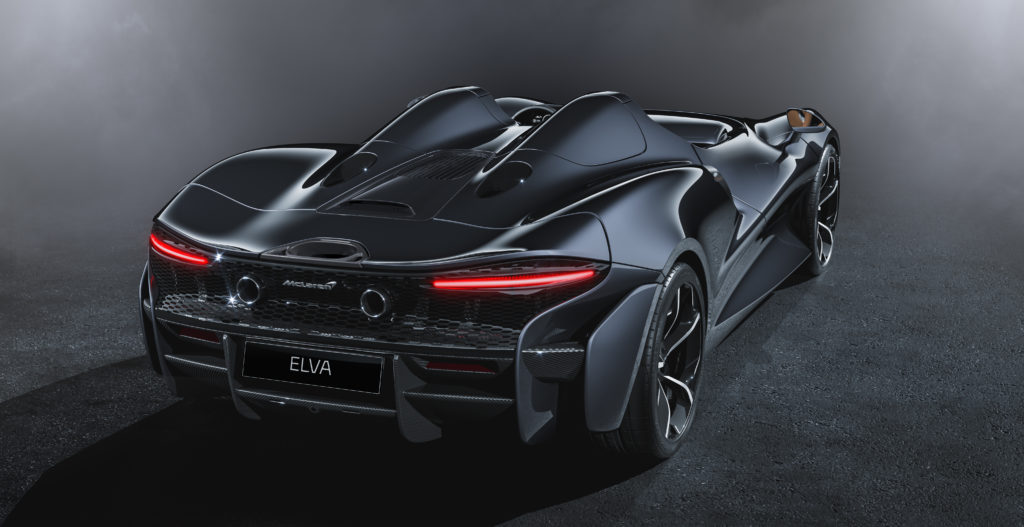 • Ford used both active aerodynamics and the vehicle’s body design for speed and cooling on the 2020 Shelby Mustang GT500.

• The 2019 Kia K900 had wheel air curtains and full underbody panels for aerodynamics and underbody cooling ducts for the brakes. The vehicle also has an “active air flap” which automatically adjusts itself depending on the driving speed.

It’s also interesting to note how McLaren was able to save weight by using a sintered carbon ceramic disc. The discussion shows the kind of trade-offs OEMs might make in terms of lightweighting — and it’s a reminder that deviating from OEM specifications can alter the overall performance of a vehicle in unexpected ways. Again, even though we’re talking a supercar here, the principle is the same for other vehicles as well.

“Carbon, too, forms the core of the braking system which is the most advanced ever fitted to a McLaren road car,” McLaren wrote. “Each sintered carbon ceramic disc measures 390mm and takes significantly longer to produce than a conventional carbon ceramic disc, but the resultant material is much stronger and has improved thermal conductivity. This allows the front brake discs in particular to be reduced in size, benefitting unsprung mass while still maintaining performance. Cooling requirements are lessened, reducing the brake ducting needed, which further reduces weight and improves aerodynamic efficiency. The braking system was first introduced on the McLaren Senna but is enhanced for the Elva with the addition of titanium caliper pistons which save a total of 1kg across the vehicle.” (Emphasis ours.)

A couple of other details might be of interest to collision repairers:

• McLaren built the exhaust out of titanium and Iconel, and it 3D-printed the exhaust finisher.

• The vehicle could have a unique paint job — or opt for a “Gloss Visual Carbon Fibre Body” showing off the vehicle’s substrate.

“Additional personalization options available through McLaren Special Operations (MSO), the bespoke division of McLaren, include interior color choices for the Ultrafabric and leathers; virtually limitless exterior paint colors and almost anything else between a delicate pin-stripe on the wheels and a blended full-body ‘contour’ or ‘velocity’ finish that mixes multiple colors across the length of the vehicle,” McLaren wrote. “Any selection is individually hand-painted by MSO’s highly experienced craftspeople.

“Alternatively, customers can select a Gloss Visual Carbon Fibre Body, which exposes not only the carbon fibre body panels, but also the perfectly aligned twill of the composite material. This can be further enhanced with a range of color tints. McLaren Special Operations can also develop a bespoke tint for the exterior or interior carbon fibre.”

The McLaren Elva uses creative active and passive aerodynamics to allow riders to travel at high speeds without a windshield. (Provided by McLaren)

The McLaren Elva’s body side panels span more than 10 feet long and are carbon fiber. (Provided by McLaren)

The front clamshell of the McLaren Elva is carbon-fiber and just 1.2mm thick. (Provided by McLaren)

The McLaren Elva has an active rear spoiler. The underside and rear bumper extensions also play a role in aerodynamics. (Provided by McLaren)