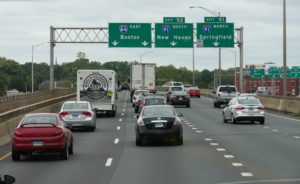 During a June hearing, Woodlock, Healey and a lawyer for AAI explored if it would be acceptable for Woodlock to drop the model year 2022 deadline for compliance built into the law, and whether the entire law should be struck. Automakers have maintained that the statute is preempted by federal law, and cannot reasonably be met.

Woodlock has also explored whether halting OBD-II authorization and deactivating telematics would be acceptable solutions for automakers to temporarily comply with the law.

Healey’s office has so far postponed enforcement of the law while the court case plays out.Automakers said the law should be thrown out for being impossible to comply with given a timeframe even supporters knew was unrealistic.

Woodlock has been unwilling to consider striking the timing section and leaving the rest of the law intact, because this “piece of legislation by the people” should represent what the voters approved.

Featured image: Road signs at an interstate highway for directions and arrows to Boston, New Haven and Springfield. (RaksyBH/iStockphoto)