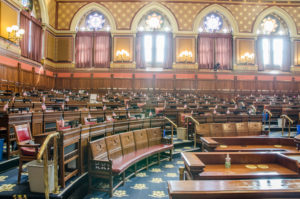 Would an OEM ever specify the use of an aftermarket or recycled part to address a recall? That’s what a representative of the Auto Care Association (ACA) seemed to be suggesting to Connecticut lawmakers during a March 9 Transportation Committee hearing.

Objecting to House Bill 5366, which would require repairers to follow OEM procedures, including the use of OEM parts unless the customer and repair shop decide otherwise, Tom Tucker asserted that the bill would have a negative effect on the aftermarket parts industry and consumers.

“Let me remind the committee that, or state to the committee that last month, manufacturers in one week had 1.3 million cars recalled due to defective parts and components,” Tucker, the ACA’s senior director of state affairs, said. “And so imagine the challenge to consumers if aftermarket parts or recycled parts were not available.”

Tucker was one of more than a dozen people who offered testimony to the committee during the four-hour hearing. The testimony frequently turned to what’s meant by OEM, aftermarket, and recycled, and whether anything but an OEM part can truly be of “like kind and quality.”

The legislators now face the challenge of sorting out often contradictory assertions, and deciding what is in the best interest of the state’s consumers. “We’ve got a struggle before us,” said state Rep. Roland Lemar (D-96th District), the House chair of the committee.

In addition to the OEM provision, the bill would prohibit any “person or entity” from asking, requiring or pressuring a shop to “repair a vehicle in an unsafe manner,” or to use an aftermarket part or a recycled part from a vehicle older than the one being repaired.

While opponents warn that HB 5366 could create a parts monopoly for the OEMs, collision repairers told legislators that they see a place for both recycled and aftermarket parts, as long as they and the car owner agree that their use is safe and appropriate.

Proponents said the bill would give consumers the right to determine how their vehicles are repaired, and eliminate “outside interference” by insurance companies in those decisions.

In fact, the branding of Tier 1 parts as OEM equivalents has been highly problematic. LKQ Corporation in April 2021 told a Texas House committee that a bill’s proposed definition of “like kind and quality” aftermarket parts would be impossible to comply with, because automakers would not release their internal specs. Stellantis (then FCA) confirmed in 2019 that a position statement declaring “No supplier is authorized to utilize FCA US LLC tooling, test equipment or Intellectual Property in the development or production of aftermarket glass” meant Tier 1s as well.

Denso described a similar restriction at a 2019 Collision Industry Conference session in addressing the question of why it doesn’t just sell the OEM parts it makes in its own packaging: It might be the OEM’s intellectual property, with the Tier 1 merely contracted to execute it.

Tucker’s equivalency claim was immediately challenged by Tony Ferraiolo (A&R Body Specialty), who was next to testify. “With all due respect, Mr. Tucker, I would love to have you come down to my shop and we can show you some of the differences with these parts,” he said.

“In fact when Ford, Chrysler and some of the other manufacturers have tested these parts on cars, they have failed. So I don’t understand how he can say that they are like kind and quality. They are not.”

“There are some good aftermarket parts, but there are crashworthiness parts that have not been crash tested,” said Bob Amendola (Autoworks of Westville), president of the Auto Body Association of Connecticut (ABAC). “You cannot say that they’re the same as an OEM part that has been crash tested.”

State Rep. Brandon Chafee, a member of the Transportation Committee, drew his own distinction between OEM and aftermarket parts.

“If I am in an accident, I would prefer to have OEM parts used. As somebody who’s worked on multiple cars as a hobby, rebuilt vehicles, the notion that aftermarket parts are just as high quality as OEM materials is just patently false, in my opinion. From the materials, the machining, the rubber, the seals, everything OEM is generally much higher quality than anything you’re going to get aftermarket,” Chafee said.

Andreas Heiss, the Northeast manager of government affairs for LKQ Corporation, did not directly address parts quality, instead focusing on other factors.

“Aftermarket and recycled parts often provide consumers with better warranties, better prices, and better availability,” Heiss said. “The parts we sell aftermarket have a lifelong warranty; manufacturer parts are warranted for one year. In addition, we have a promise of protection: If any of our parts fail, and they’re properly installed, we indemnify the body shop…. The car companies don’t do that.”

For example, “there may be, you know, a mirror, or something like that,” said John Parese, general counsel for ABAC. “This is not a safety concern. And the consumer says, ‘Yeah, I’m okay with the aftermarket, it looks fine, and it’s going to function fine.’ And that happens all the time. That’s no problem. And that’s not generally what we’re objecting to.”

Amendola said ADAC has no objection to the use of used parts, when appropriate.

“I don’t know how this misnomer got into this bill. We use used parts,” he said. “If they’re like OEM parts, they are exactly as the recyclers have testified here today, if it’s a like kind and quality part, it’s a fine repair.”

“If the [like kind and quality] sales recyclers have an issue, they should take that up with the OEMs, if the OEMs don’t think that they’re the same,” Amendola said. “We don’t think that, and don’t want that option to be taken off the table.”

“We understand cost of repairs, and recycling is a very ecological and economical choice when necessary,” Amendola said. “But that has to be put into the hands of the repairers, and it’s not about money. It’s about safety.”

What’s truly at issue, supporters of the bill said, is who gets to make the decisions about how a vehicle is repaired.

“We deal with the situations of these cars being repaired every day. And we have the duty to put cars back into safe working order for consumers,” Amendola said.