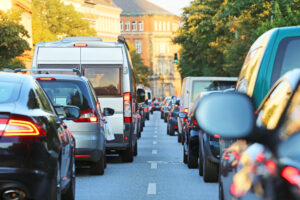 The new Corporate Average Fuel Economy (CAFE) standards require an industry-wide fleet average of approximately 49 mpg for passenger cars and light trucks, which NHTSA says is the strongest cost savings and fuel efficiency standards to date and will increase the estimated fleetwide average by nearly 10 miles per gallon for model year 2026, relative to model year 2021. Originally, NHTSA said the average would be increased by 12 miles per gallon.

“Strong fuel economy standards strengthen U.S. energy independence and help reduce reliance on fossil fuels,” NHTSA said in a press release. “Since CAFE was signed into law in 1975, the standards have reduced American oil consumption by 25%, or approximately 5 million barrels a day since then.”

NHTSA estimates the new standards will reduce fuel use by more than 200 billion gallons through 2050 compared to a continuance of the prior standards.

New 2026 MY vehicles will get 33% more miles per gallon compared to 2021 vehicles meaning drivers will only have to fill up their tanks three times rather than the current four times, according to NHTSA.

“Today’s rule means that American families will be able to drive further before they have to fill up, saving hundreds of dollars per year,” said U.S. Transportation Secretary Pete Buttigieg, in the release. “These improvements will also make our country less vulnerable to global shifts in the price of oil, and protect communities by reducing carbon emissions by 2.5 billion metric tons.”

The Environmental Protection Agency (EPA)’s final rule signed Dec. 20 for model years 2023-2026 allows for 160.9 grams of carbon dioxide emissions per mile on average in OEMs’ passenger car fleets and 254.4 grams per mile for light truck fleets by model year 2026. The expected result is an average fuel economy of 40 mpg by model year 2026 while the previous standards would meet 32 mpg, according to an EPA regulatory update.

Automotive News reports that Texas Attorney General Ken Paxton filed a challenge against the EPA rule along with Ohio, Alabama, Arkansas, Alaska, Indiana, Kentucky, Louisiana, Mississippi, Missouri, Montana, Nebraska, Oklahoma, South Carolina, and Utah. Arizona filed a separate legal challenge. Many corn and soybean growers have also challenged the rules in court. However, the Alliance for Automotive Innovation, which represents most major automakers, backed the EPA’s rule, according to Automotive News, and said in a court filing while it “will challenge the industry” it provides OEMs with “critically important flexibilities.”

The new NHTSA standards will reduce greenhouse gas (GHG) emissions and air pollution to “improve public health and provide environmental justice for communities who live near freeways and other heavily trafficked roadways, which are disproportionately low-income communities of color,” the NHTSA release states.

“NHTSA is helping American families by making life more affordable – and the air cleaner for their children,” said NHTSA Deputy Administrator Steven Cliff, in the release. “These vehicles will be better for the environment, safer than ever, and cost less to fuel over their lifetimes. We are proud to fulfill President Biden’s mission to move us to a more sustainable future, one that strengthens American energy independence and helps put more money in American families’ pockets.”

NHTSA noted that the new standards came out as the automotive industry is retooling factories to produce cleaner and more fuel-efficient vehicles in response to “a rapidly growing market demand” for them, including electric vehicles (EVs).

Honda and Ford, for example, plan to become carbon neutral worldwide by 2050. Ford has also said it will begin using 100% locally-sourced renewable energy at its plants by 2035 and eliminate single-use plastics from its operations by 2030. General Motors plans to reduce its operational energy intensity by 35% by 2035, use 100% returnable packaging made from sustainable content and produce zero waste by 2030. Both plan to eventually reach zero emissions. “Nissan Ambition 2030” is an initiative by the company for “a cleaner, safer, and more inclusive world” that includes the announcement last week that the company plans to invest $500 million at its Canton, Mississippi vehicle assembly plant to “preserve and upskill” 2,000 jobs by transforming it to produce two new all-electric models beginning in 2025.

EPA gives back California’s power to set vehicle greenhouse gas emission standards; Other states can now request to do the same