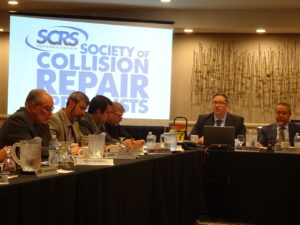 The Automotive Service Association’s lobbyist last month showed repairers “very narrow” sample bill language it advocated in its push for legislation to force insurers to reimburse OEM repair procedures, and the Society of Collision Repair Specialists’ executive director suggested such an approach could be wise.

The ASA and Alliance of Automobile Manufacturers, which represents many OEMs, have announced a concentrated effort to pursue such legislation this session. Redding listed a series of bills which have arisen this session, though he didn’t specify if any arose independently of the associations’ efforts. (The two trade groups had anticipated such legislation might appear organically as well.) SCRS doesn’t typically get involved in state-level legislation, but it has signaled support for the effort.

ASA, SCRS, the Alliance of Automotive Service Providers and Assured Performance have since 2011 formally declared OEM repair procedures to be the standard of care. The insurer and collision repair training organization I-CAR has also said the same for years.

“We’ve had a lot of interest,” Redding said. He said some state groups were also building support and preparing to bring the issue to legislatures in 2020.

Redding attributed some of the interest to the John Eagle Collision case, in which a body shop lost a $31.5 million verdict in which a jury found a failure to follow OEM repair procedures was largely responsible for a couple’s ordeal. (The couple later settled from an undisclosed amount.)

However, he said, much interest existed “long before that.”

“Collision issues, historically, move slow. and when they move, they move big,” Redding said. He asked Schulenburg if he saw the interest subsiding.

“I think it only becomes a bigger issue,” Schulenburg said, citing increasing vehicle technology as a driver.

The ASA is pushing for language along these lines, according to Redding:

The statute mentioned in the last paragraph is New Hampshire’s and included by the ASA purely as an example. The thinking appears to be that each individual bill would reference the relevant alternative parts law for that particular state.

The audience on the webinar would notice the language is “very narrow” and contains “no discussion of parts,” Redding said. That’s intentional.

“To be clear, ASA does not support the use of OEM parts only,” Redding’s organization wrote regarding the Connecticut bill. “ASA’s interest is in requiring the industry to adhere to a set of repair procedures that assure the best opportunity for vehicle safety on our highways.”

Opponents have seized upon the proposition that bills calling for OEM procedures to be followed would by definition prohibit all alternative parts. Automakers tend to only recommend their own new parts be used, arguing that they can’t vouch for anything else, including recycled parts.

For this reason, the Auto Alliance has tried to carve out an exception for parts.

“Based on our advocacy for this issue in other states, I am aware that some will argue that automaker interest in this issue is only to sell more genuine OEM parts,” written testimony from Auto Alliance lobbyist Wayne Weikel stated in Connecticut. “Essentially asserting that if a law was passed to say OEM repair procedures had to be followed, and then OEM repair procedures included language that stated that only OEM parts could be used, by default it would be prohibited to use an aftermarket part in an insurance-funded repair.

“While Alliance members absolutely believe all consumers would be best served by using genuine OEM parts on their vehicle – parts which have been designed and tested in the same manner as the original parts on the vehicle – that is not our fight on this bill. This legislation is about safe and proper repair of all vehicles after a collision. To show that our intentions on this are true, I have attached to this testimony a proposed amendment, which would stipulate that, regardless of any language contained in an OEM repair procedure to the contrary, the use of replacement parts in an insurance-funded repair shall be governed by solely by Connecticut’s existing law on the subject, Chapter 700, Section 38a – 355.”

Schulenburg on the webinar noted Redding’s reference to focused language.

He said some bills coupled the repair procedures language with other industry issues, and “it opens the door” for opposition that might not arise had the bill sought only to address procedures. Disregarding documented procedures created “undue and avoidable exposure” for customer safety and repairer liability.

Narrower language might be more beneficial for the industry, he said.

Redding noted that OEMs and repairers specifically weren’t focusing on the parts issue after “decades” of attention to that. He asked Schulenburg why it was arising in some states.

Schulenburg speculated that it might be “familiarity,” for lawmakers might automatically think of parts when they hear the word “OEM.”

Another reason: “Parts is still a big topic, and one that many repairers and consumers are still challenged by,” he said.

It might feel as though it makes sense to address it at the same time as procedures, but a “more focused approach” on procedures might be a “more tactical approach” that helps consumers, he said.

Schulenburg called insurer refusal to pay for OEM repair procedures “one of the top issues” SCRS members face. He said he constantly has conversations with repairers who want to do the proper repair but might butt up against insurer claims settlement practices.